Personnel from Hestico (supplier of Maguire loader/blender), Userve, Tederic and the mould manufacturer were on site at the time of the final machine trials at the plant in November 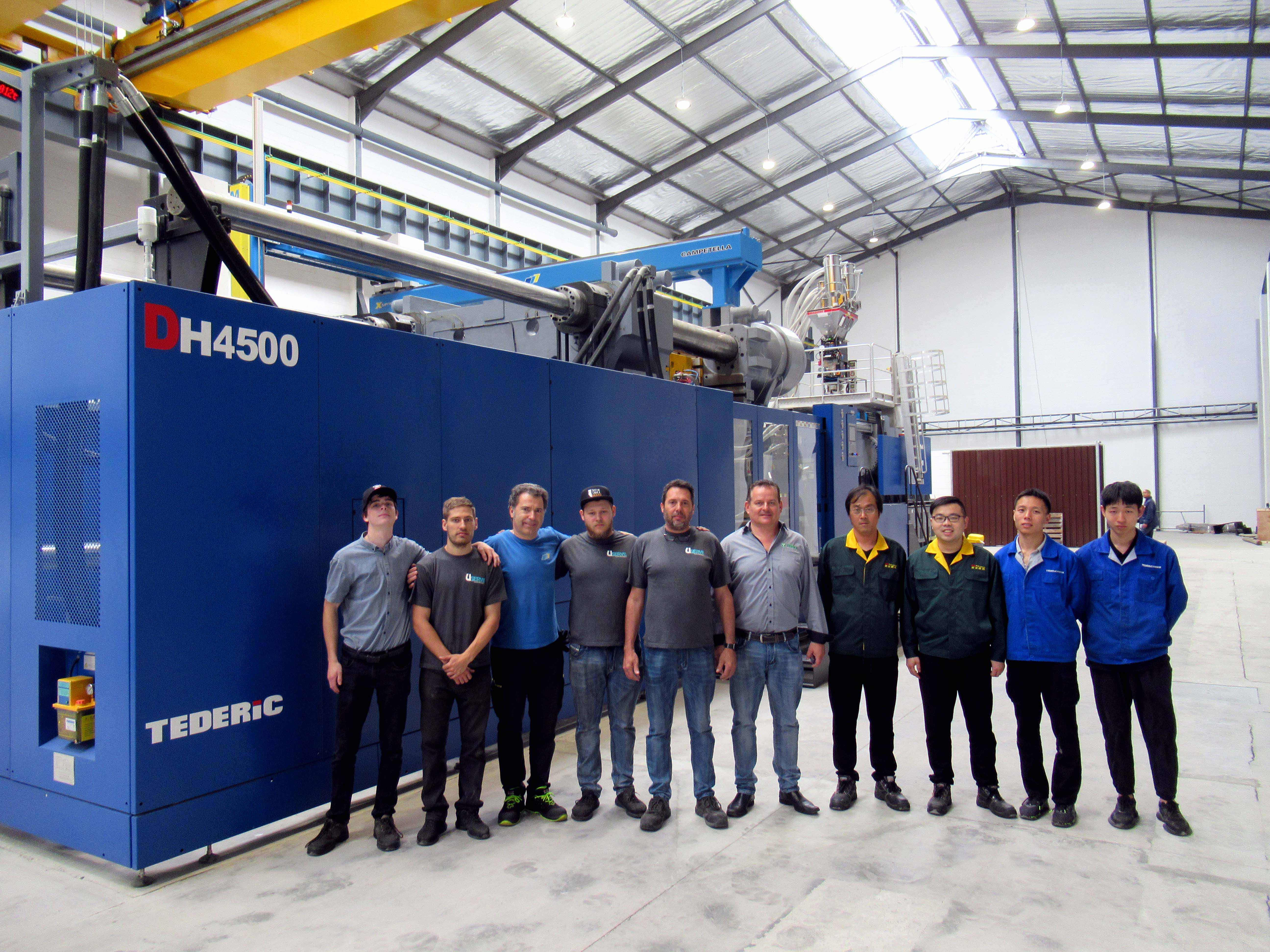 Biggest injection machines from China yet, commissioned in SA

The new systems are the biggest injection machines from China to be installed in South Africa to date, an impressive showing of the growing efficiency and capability of the Chinese machine manufacturers, now in applications to manufacture large and complex products where machines from the Far East would until recently not have been deemed suitable.

According to Umberto Favini of the machine supplier, Userve of Johannesburg, which is the SA agent for Tederic, the project has been several years in the making. A number of machine suppliers were invited to tender for the contract, including both European and Asian manufacturers. A proven track record was among the most important criteria under focus. Fortunately, Tederic has previously completed near identical projects in Turkey and other countries, which may have helped give it and project coordinator Favini the inside lane.

Up until quite recently, major contracts like this have mainly gone to the leading European marques, due to their efficiency and more recently their ability to use less power as well as the feature of reduced maintenance requirement. But Tederic, and obviously a number of the other Chinese machine manufacturers too, has made constant progress and now – as opposed to a decade ago – its machines are seen as a viable and attractive alternative.

With a capable shot weight of 62kgs per moulding, this is certainly one of the most impressive moulding applications undertaken in the industry in South Africa in recent years. But just about every stat for the project is impressive, said Favini. Of an especially intimidating scale is the mould, which weighs a staggering 63 tons. Full trials of the mould were conducted at the huge Tederic machine factory in Hangzhou, China, where several hundred of the bins were produced before the system was stripped down to be shipped.

The DH4500 unit being used to produce various large products at Tego features a servo electric screw drive, a high-speed solution necessary to inject such a large volume of melt per shot in the shortest time possible. The smaller DH 2700 unit is running a support product for the product in the DH4500.

The mould was built by a toolroom in China which Userve and Tederic have long been working with. Its entry to production in SA is major accomplishment for the toolroom.

The pick-and-place robot from Campetella of Italy is the biggest ‘payload’ robot yet supplied by the Italian robotics specialist, also represented by Userve, in South Africa.

All the peripherals were simply designed around the mould and products, said Favini. One necessity was to increase the ‘daylight’ between the mould platens to lift the product out of the zone quickly, minimising the delay to the process and further reducing the cycle times.