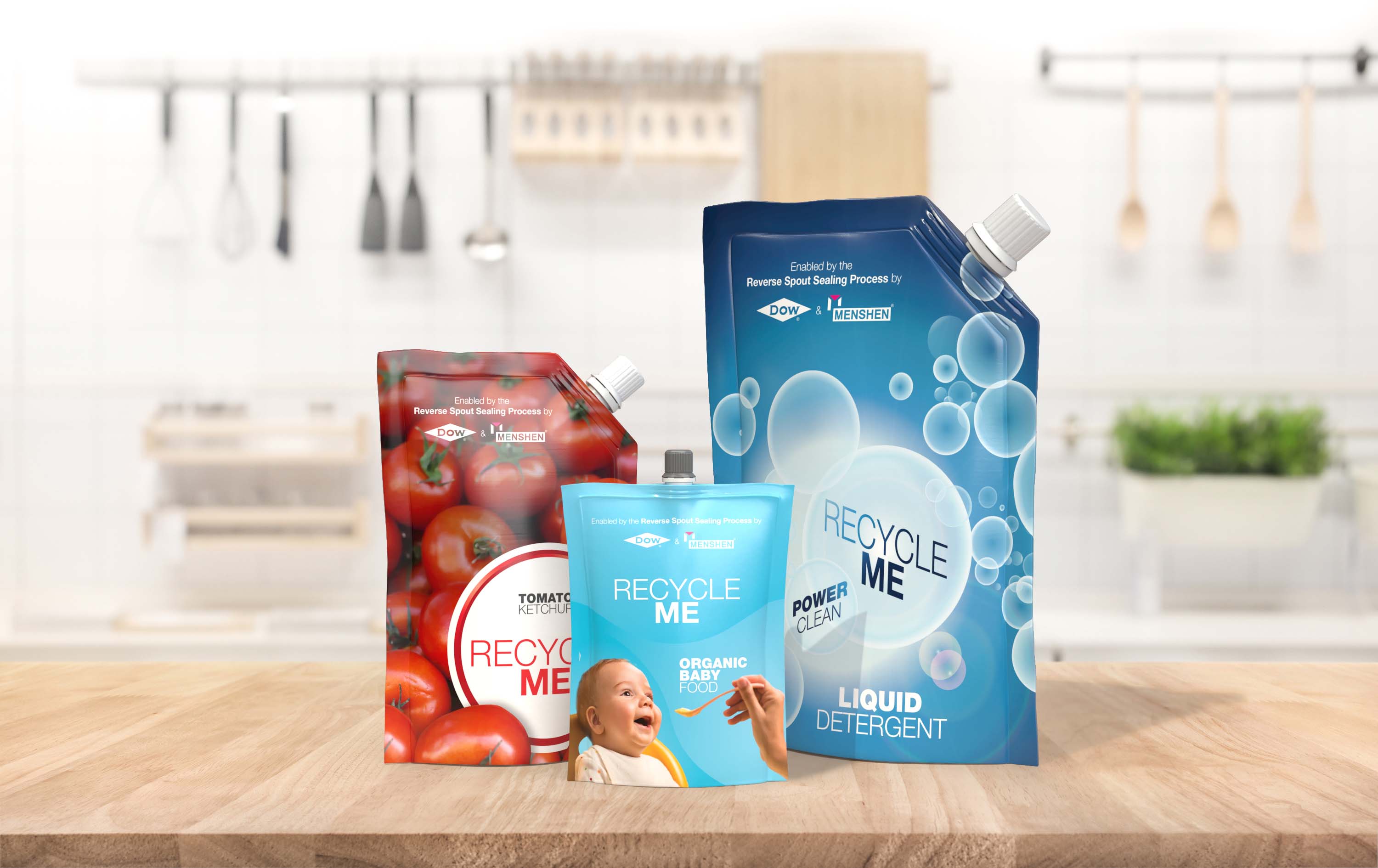 DOW and Menshen, one of the world’s leading manufacturers of caps, closures and single-serve capsules, have launched new Reverse Spout Sealing Technology that enables the production of spouted pouches made of mono-material films. This exciting technology allows converters to address the recycling criteria for flexible packaging and can help brands meet their sustainability packaging goals.

“We basically reversed the idea of where and when the heat needs to be applied during the spout sealing process”, explained Dr Peter Sandkuehler, global application technology leader at Dow’s Packaging & Specialty Plastics business. “By transferring the heat from the pre-melted spout base directly to the sealant layer of the film, we’ve solved two challenges at the same time: how to easily seal spouts to mono-material films, and how to prevent the hard spout ribs from cutting into the film.”

The new process is designed to easily seal spouts in more heat sensitive, mono-material structures made from all polypropylene or all polyethylene packaging layers. Rather than traditionally applying the heat from outside the pouch forming film to melt the seal layer and the spout, the latter is pre-melted at its base before insertion into the pouch and sealing.

“The beauty of the process is its simplicity,” said Sarah De La Mare, business development officer at Menshen. “It is actually more logical to apply the heat from the inside rather than from the outside, whether you use mono-materials or not. We are currently working with several machine manufacturers to ensure that this technology can be integrated into new and existing spouted pouch making lines.”

Reversing the traditional sealing process helps reduce the excess heat needed to be applied from the outside of the film to seal the inner, lower density film layers to a high-density spout base. At the same time, the packaging structure is less dependent on a film’s thermal resistance and film cut-in is avoided, resulting in good quality spout sealing and a pouch that looks great on the shelf.

The introduction of the reverse spout sealing technology is the result of a remarkable three-year joint development between Dow and Menshen who are working with a number of partners on technology integration and assist brand owners and converters to put the new sealing approach into practice. Both companies are working with leading manufacturers of pouch-packaging machines worldwide in order to commercialize the technology.

The technology is suitable for most pouch sizes and for a wide range of applications – from baby food, condiments, and detergents, to personal care applications such as shampoos, shower gels, or body lotions. For packaging applications that cannot compromise on content preservation, Dow combines this technology with barrier solutions in structures that are designed for recyclability.

Explore this solution at K 2019

Dow will be attending K 2019, the world’s premier conference for the plastics and rubber industry. Running from 16-23 October in Düsseldorf, Germany.