The finished FRP composite replica Supermarine Spitfire Mk VB (Type 359) aircraft built by the Spitfire Heritage Trust. The Spitfire ‘Bahlabani’ (which in Sesotho, means ‘Warrior’) was ready for its first public display in the UK on Battle of Britain Day, 15 September 2016 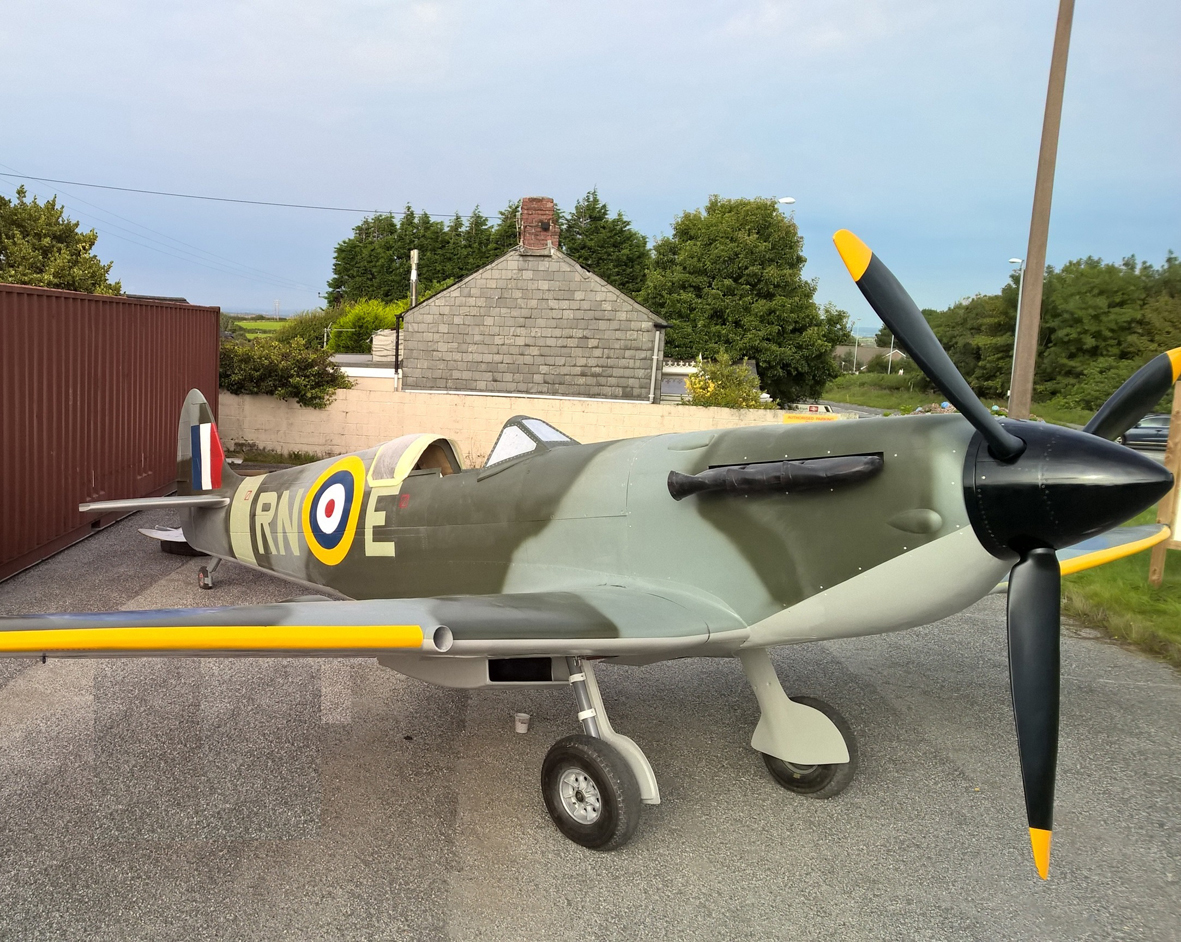 THE Spitfire Heritage Trust has recently completed a major project, successfully building from scratch an exact, full size ‘all fibreglass’ replica of the iconic WWII ‘Battle of Britain’ Supermarine Spitfire Mk VB (Type 359). Designed by Reginald Mitchell and produced from 1938-1948 at Supermarine Aviation where Mitchell was employed as an engineer, the original Spitfire fighter-interceptor was the first ‘all-metal’ stressed-skin aircraft.

All of the glass reinforced plastic (GRP) aircraft body parts manufactured for this replica plane were moulded using laminating resins and structural adhesive materials supplied by the project’s principal sponsor Scott Bader, which donated the majority of the composite materials used to construct the Lesotho replica Spitfire.

This authentic, GRP replica Spitfire has been specially built in the UK for the Kingdom of Lesotho in southern Africa by a dedicated team of volunteers from The Spitfire Heritage Trust. The Lesotho replica Spitfire project came about to recognise and pay tribute to the generous ‘Gift of War’ given in June 1940 by the people of Basutoland, with a population of only 400 000 at the time.

The response to the war funds appeal was overwhelming, raising sufficient money from donations to pay for the (then) costs of manufacturing 24 Spitfires, so providing much needed new fighter-aircraft for two full strength Royal Air Force (RAF) Spitfire fighter squadrons. From this ‘Gift of War’ donation, No. 72 (Basutoland) Squadron was born in 1940 and continues today as an active RAF training squadron, in which trainee pilots now fly the RAF’s advanced trainer the Tucano T1, built under licence by Shorts of Belfast, before going on to fast–jet training.

The Lesotho replica Spitfire was manufactured in Victoria, close to St Austell, Cornwall in the south west of England, using factory space, facilities and GRP expertise provided by Paul Ching, MD of Evolution Boats Ltd. Paul Ching is a master mould designer and keen Spitfire enthusiast, who brought invaluable experience to the team having previously built a FRP replica Spitfire IIa for the RAF, which is still on permanent display at RAF High Wycombe (www.raf.mod.uk/rafhighwycombe/).

Being a volunteer-manned project, it took a little over four years for the small production team to complete the Lesotho Spitfire replica, which had to be completed and supplied this year to tie in with it being the 50th Anniversary of Lesotho’s Independence from Great Britain. Working alongside Ching, and the mainstay of the Spitfire Heritage Trust Lesotho project production team, was replica manufacturing veteran Patrick J. Mitchell, who has worked on many similar projects, including previously building four other replica Spitfires; while not related to the famous Spitfire designer R.J Mitchell, with whom he shares the same surname, Pat (P.J. Mitchell) feels connected ‘in spirit’, given his passion for the aircraft.

The team started from scratch, with the key first stage of the project being to fabricate the individual patterns and plugs. New moulds were produced for each of the GRP parts required to produce the replica propeller, and the monocoque composite sections which make up the fuselage, wings and tail sections; exact dimensions were achieved at this critical mould making stage by copying off an existing original aircraft. Once all the moulds had been produced and checked, the next stage of the project was to start laminating the FRP parts, section by section.

For this static, display replica aircraft, using hand lay-up glass fibre – UPR resin based laminate systems were technically sufficient for moulding the GRP parts. However, there were still a number of technical performance-in-use considerations to ensure the correct choice of laminate system for specific sections of the aircraft to ensure that key areas would have the necessary mechanical and physical properties needed to cope with being exposed long term to the elements.

Annual climatic conditions in Maseru, the capital of Lesotho where the Spitfire is destined as a permanent outdoor display show piece, typically have seasonal wet and very dry conditions, high winds, extensive periods of intense sunlight and a range of extremes in the ambient temperature from as low as -10°C at night in winter up to an average daytime of 28°C in high summer, with maximum temperatures sometimes exceeding 35°C. To cope with these extreme outdoor conditions, after taking advice from Scott Bader’s technical support team, two different Crystic polyester back-up resin grades were specified. For the wings, given the dark paint colours used to camouflage the upper sides along with prolonged periods in direct sunlight the upper surface temperature of the wings was expected to regularly exceed 30°C in high summer.

In these sorts of high ambient temperatures, to ensure that the wing sections maintained stiffness, did not warp or twist, and could support their own weight, Crystic 489PA isophthalic unsaturated polyester (UP) resin was specified due to its elevated temperature performance, providing excellent strength retention up to 40°C. In addition to the upper and lower GRP wing sections and inner cross stays, the inner ‘I’ beam shaped GRP main spars (one for each wing) which run the length of the wing and fit into a rectangular ‘carry-through’ tube through the lower fuselage section in front of the cockpit, were also laminated using glass reinforced Crystic 489PA resin on the primary structural bulkhead immediately after the engine nose section.

The wing sections were also bonded together using Scott Bader’s primerless MMA Crestabond M1-30 structural adhesive, especially in high stress areas. Crestabond M1-30 was used to join the upper and lower FRP wing sections together, the internal FRP spars in the tail and fuselage, as well as for bonding in metal inserts where needed. A critical stress area where Crestabond M1-30 was used was to secure the underside rigid mountings on which the replica is permanently secured in its display position; the mounting must be able to withstand the very high stress loading coming through the wings in particular during high winds.

David Spencer Evans, Chairman of The Spitfire Trust and replica expert explained: “It is less well known that replica aircraft wings and mountings can come under higher loads than in flight during high winds. This is one of the reasons that the project team spent the time we did evaluating all of the technical requirements with Scott Bader, selecting the most suitable laminating resins and level of glass fibre reinforcement for each FRP part, and pinpointing where it was advantageous to use a structural adhesive.”

This long overdue WW2 tribute to the people of Lesotho has been provided by the Spitfire Heritage as a legacy for future generations, in the hope that this iconic symbol will stimulate interest and help to foster stronger social and economic connections with Great Britain in the future. The legacy includes the creation and provision of a new composites apprentice training programme for a number of young adults working in SMEs in Lesotho. Scott Bader South Africa, which has its main chemical production plant located in Hammersdale, approximately 215 km from the border with neighbouring Lesotho, has also agreed to provide technical support, including the use of its laboratories for projects and advice regarding the apprenticeship training programme.