Top SA, int’l speakers – Robert Bosch of Rubber Nano Products and Dr Joseph Hallett of Aditya Birla of England were adjudged the top local and international speakers, and received their awards from Dr Percy Hlangothi, chairman of the IOM in the Eastern Cape. 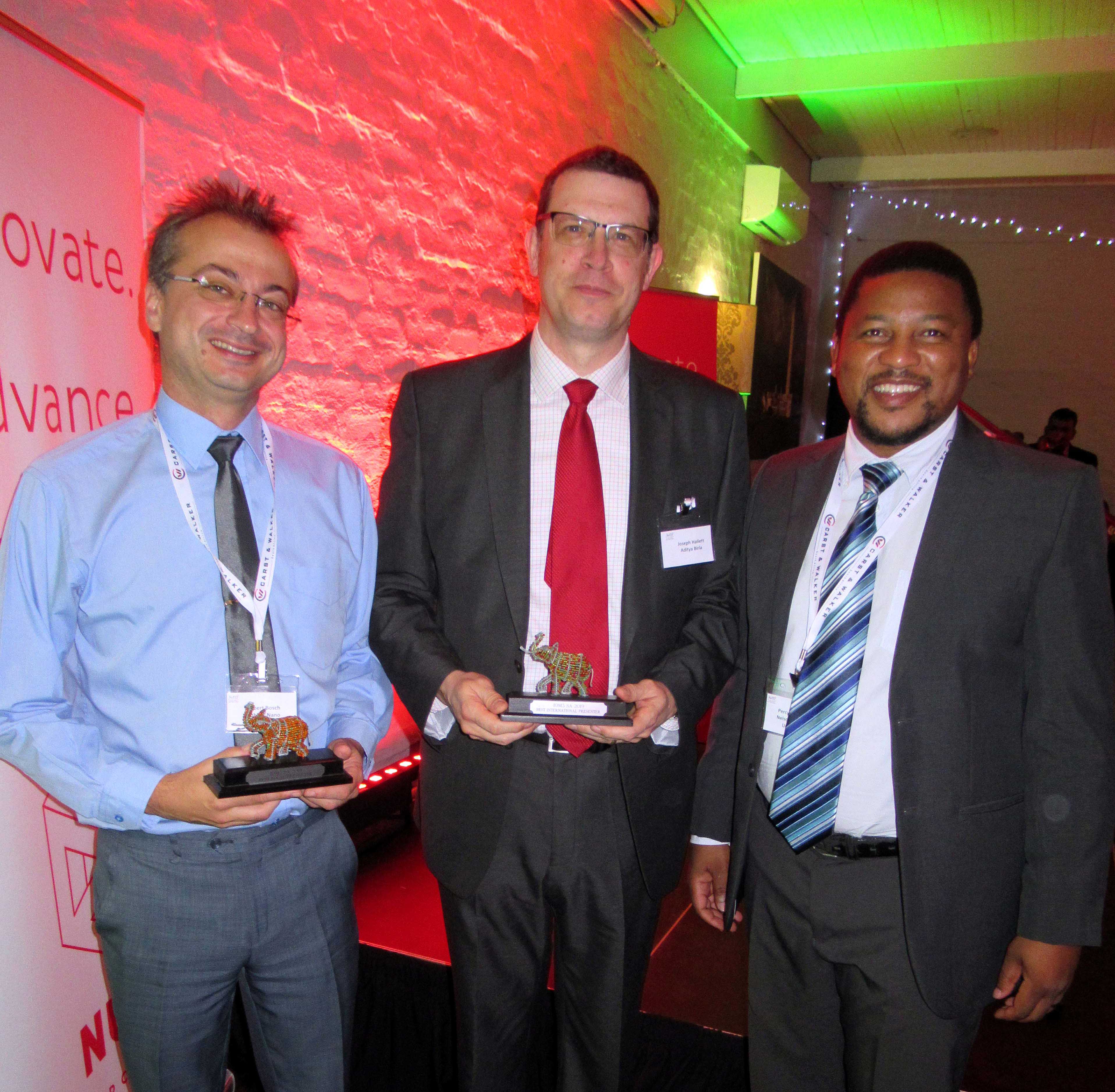 RUBBER, with all its complicated mixing formulations and alchemy, was to the fore again at the recent IOM³ National Rubber Conference, the 24th edition of the event.

Played out at the very welcoming Cape St Francis Resort in the southern Cape from 4-6 April, the show drew 109 delegates, which is a record. And hats off to the IOM organisers. For long this association was a fairly British affair, with several of the main characters having arrived from Zimbabwe. But that’s long gone: the Institute of Materials in South Africa (elsewhere the IOM includes ceramics and metals sectors) has transformed itself and drawn in a sizeable contingent of student members, most of who seem to be thriving under the tutelage of Dr Percy Hlangothi at the Polymer Chemistry department at Nelson Mandela University in Port Elizabeth.

The show kicked off with keynote speaker Professor Chris Adendorff of Nelson Mandela University’s address about ‘Future Implications of the 4th Industrial Revolution’ which jolted quite a few in the audience into wake-up mode: let’s just say a daunting path lies ahead. Even though some say Industry 4.0 hasn’t even reached Africa yet, Prof Adendorff suggested there are major implications for those who prepare. According to Chris, 75% of the jobs to be realized in this future electronic realm “have not even been created yet”. So, the way it is at present is, we know very little – maybe nothing? – about what lies ahead.

But back to the present: the fact of the matter, is that rubber remains a bit of a dark art where meddling with formulations is not widely welcomed. This is also a relief, given that the product most closely linked to rubber is the automotive tyre, and that’s an area where consistency and reliability is a lot more welcome than experimentation.

Anyone unfamiliar with what’s involved in getting rubber to cure is almost guaranteed to be confused at events such as this, but the net effect for just about everyone in the rubber industry is that toying with the formulae hasn’t been a prominent trend.

Activ8™ – A different means of cure

Bosch has been giving presentations at the IOM events since the early 2000s with, as RNP describes on its website: ‘The Rubber Nano Vision of polymer curing facilitates a new way of looking at a rubber system; it provides unique tools to achieve previously unattainable cost savings while maintaining and in many cases actually improving the quality of the final rubber product’.

Originally RNP was outright involved in nano work and then focussed its research on coated nano solutions but has since “gone beyond” nano on a course that led it to the development of Activ8®, an additive activator that can improve modulus in cure and also cut process times by a sizeable margin. Cure temperatures are also reduced, by as much as 10 degrees.

Activ8 is formed by reaction of polyethylene glycol and sodium metasilicate. Results so far suggest that it can substantially outperform and even replace zinc and silanes in the rubber blending process.

Rubber Nano Products has also made some international progress and is working with a large rubber company in Italy, where positive results have been achieved and which could boost commercialization.

It’s not easy challenging convention, so congrats are due to Bosch, whose presentation earned him the ‘Best Local Paper’ award.

Representing the top global carbon black manufacturer, Birla Carbon, as well as the IOM London, Dr Joseph Hallett was a busy man. The IOM has some 18,000 members, with just 20% of those based outside the UK. The organisation has played a positive role with its global affiliates, however, and created opportunities for members all over the place (including SA). Ties between the SA organisation and the IOM London have remained strong.

Birla Carbon (headquarters in India), where Dr Hallett is technical services manager, is a global leader in carbon black production, operating over 130 manufacturing facilities and has annual revenues estimated at over $44,3-billion. Aditya Birla entered the carbon black market when it purchased Columbian Chemicals Company of the USA in 2011.

There was much interest in Dr Hallett’s presentation on ‘Enhanced Performance Tread Grades to Meet 21st Century Requirements’ (of carbon black). Most consider carbon black to be a standard commodity, but no sir, it’s more complex than that. Given that Birla is one of the global leaders in carbon black, it’s no surprise that some of its top customers are seeking performance advantages. The ‘enhanced performance’ Joseph spoke of focussed particularly on improved energy efficiency, in specific areas such as to lower tyre rolling resistance, reduce motor energy and achieve longer life for tyres, conveyor belting or other rubber goods. Part of the problem for the CB manufacturer is that achieving an ideal balance of all parameters (hysteresis, traction, abrasion resistance and processability) remains a never-ending quest. (Hysteresis refers to rolling resistance.) Ironically, carbon black is the one input material which is seen as most likely to enable improved performance criteria.

Besides achieving optimum abrasion resistance, other objectives include reduced mixing times and improved processability – both of which, obviously, would improve goods manufacturers’ competitiveness.

Resilience is a word often applied to rubber, but in this case it was also the title of a presentation by Donal Ryan of Nuvo Rubber. From Ireland originally, Donal has a PhD in polymer technology. He has been in Africa since 2006 and it has to be said, the period since has been challenging for the local rubber sector.

“We are in a stagnant industry,” said Donal, “and the first thing we have to do is realize that. Then we can consider initiating an industry-wide strategy.”

Among the factors cited for the lack of growth, he suggested, were the low level of investment in R+D as well as that many of the manufacturers had been reluctant to invest in technology. He proposed that industrial goods manufacturers should form a venture similar to the SA Tyre Manufacturers Conference (SATMC) which could assist in developing strategies to grow the sector. And even that funding from the potential recovery of REDISA could be used as a catalyst for an industry-wide initiative.

Donal presented a number of cases of successes and failures in well-known global corporations, and in the examples cited it was noticeable that the ventures that collapsed seemed wholly oblivious to the problems they faced, and even ignored warning signs. So, let’s not do that.

In his presentation ‘Protection of Dienne-containing Elastomers against cracks by Ozone,’ Rudi van Niekerk of H&R Africa dealt with the problems created by the increase in ozone (caused by elevated UV and air pollution levels) and the direct effect that has on elastomer and rubber goods. The ozone ‘attacks’ carbon double-bonds in goods in a fairly rapid reaction which leads to the deterioration of elasticity in the moulded product.

H&R supplies waxes which mitigate against this condition and help retain elasticity. The waxes are produced via conventional solvent extraction processes (as in the petrochemical production process) via a vacuum distillation unit. Blended optimally, the wax then ‘migrates’ to the surface of the moulded product and forms a thin layer which protects against ozone attack, thus enhancing performance of the item and prolonging life.

The main presentations were interspersed by student presentations, all of them from Nelson Mandela University, the majority of which focussed on treatment of waste tyres and rubber reclaim, which is a massive area that has been badly neglected. A number of the students have progressed to post-grad study and it’s got to be hoped that, should the REDISA tyre recycling venture manage to reflight, their research work will be utilized and implemented.