Louis Moodie of Wrapetfill with Thirsti setter Owens Adams and plant manager Christopher Birkholtz and Henk de Klerk of Wrapetfill, which supplied the 1Blow machine. The removable, height adjustable exit conveyor was manufactured by Delta Engineering and supplied under the 1BLOW machine scope. 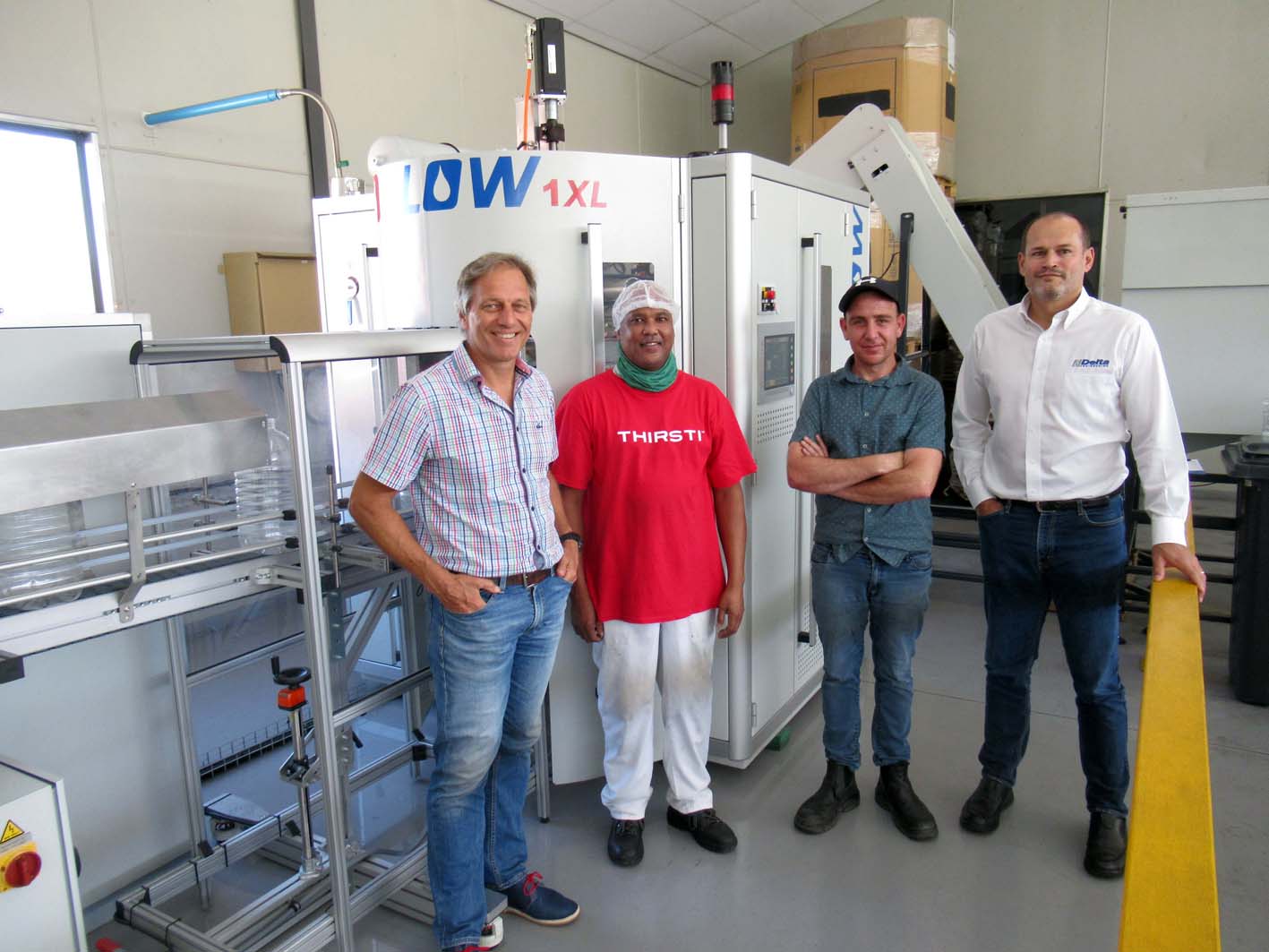 THIRSTI, a manufacturer of mineral water and related beverages in KZN, where it taps into an extremely pure water source from the Drakensberg mountains, has opened a plant in the Western Cape. The choice of Tulbagh for its second plant followed an extensive search for a similarly pure water source that led Thirsti personnel to numerous natural water sources around southern Africa.

At the Tulbagh plant, where Thirsti is at this stage producing just one product – 5-litre water packs for several national retailers – it has installed a 1Blow stretch blow moulding system from France which offers comprehensive technology advances for the production of PET containers at rates up to 1 000 bottles an hour.

1Blow is a new face in SA, where it is represented by Wrapetfill of Cape Town. This is one of two 1Blow machines in the country, although a number are already installed in Mauritius and elsewhere in Africa.

Based in Paris, 1Blow introduced its innovative linear reheat machines as recently as 2010. The patented design streamlines mechanical functions for greater efficiency while offering the flexibility to use blow moulds from competing manufacturers, including KHS, Krones AG, Sidel and Sipa SpA. 1Blow machines are offered with up to five different technology kits for different bottle design and functional possibilities, from preferential heating (oval bottles) to neck orientation, hot fill bottles and 1Blow’s own Sure Grip® feature.

1Blow offers systems for containers from 100ml to 20 litres with neck finishes from 20-70mm. Capacities range from 1 000 to 9 000 bottles/hour – in other words it is operating in the sphere below that of the big-output rotary machines.

Other standout features of the 1Blow machines include small footprints and inclusive air recovery technology that bypasses the need for external 7-bar air supply.

Small machine footprint is a big factor in start-up operations such as this, and for that matter for all container manufacturers, for the simple reason that space costs. But that’s only one of the features of the 1Blow 1XL system that drew the interest of Rob Hoatson of Thirsti.

“We needed a compact machine with low energy demand, and the 1Blow line offers exactly that,” said Hoatson. The choice of machine was also dictated by line-speed, and the 1XL unit is meeting that criteria exactly, running 5-litre containers at an estimated 1 000 bottles/hour (cycle times of less than 4 secs).

Hoatson is impressed by the low reject rate too, with preform wastage running at less than 0.2%.

In order to control set-up costs at the new plant, Thirsti shifted equipment from its far larger plant in Normandien, KZN, including conveyors and a filling system.

The 1XL system packs a lot of punch for its 2m x 2m dimensions. Every detail has been fine-tuned to reduce maintenance needs, and also make operation of the machine easier. The unique open architecture allows space for even tall technicians to enter the machine for inspections or adjustments. The use of servo motors for stretch rod movement, preform transfer, in-feed and the oven chain significantly improve accuracy and shortens set-up and change-over time.

Besides Europe, 1Blow is already well-established in the USA and Canada. One of the features that may have benefitted it in the rollout is the use of standard European OEM parts that are locally available, obviating need to courier out parts from Paris.

Wrapetfill’s Henk de Klerk and Louis Moodie are very positive about the 1Blow technology, especially the quick mould change facility (which will only be necessary once Thirsti proceeds with its roll-out in the Western Cape) and eased operation (the entire machine manual and preventative maintenance guide are available on the control system).