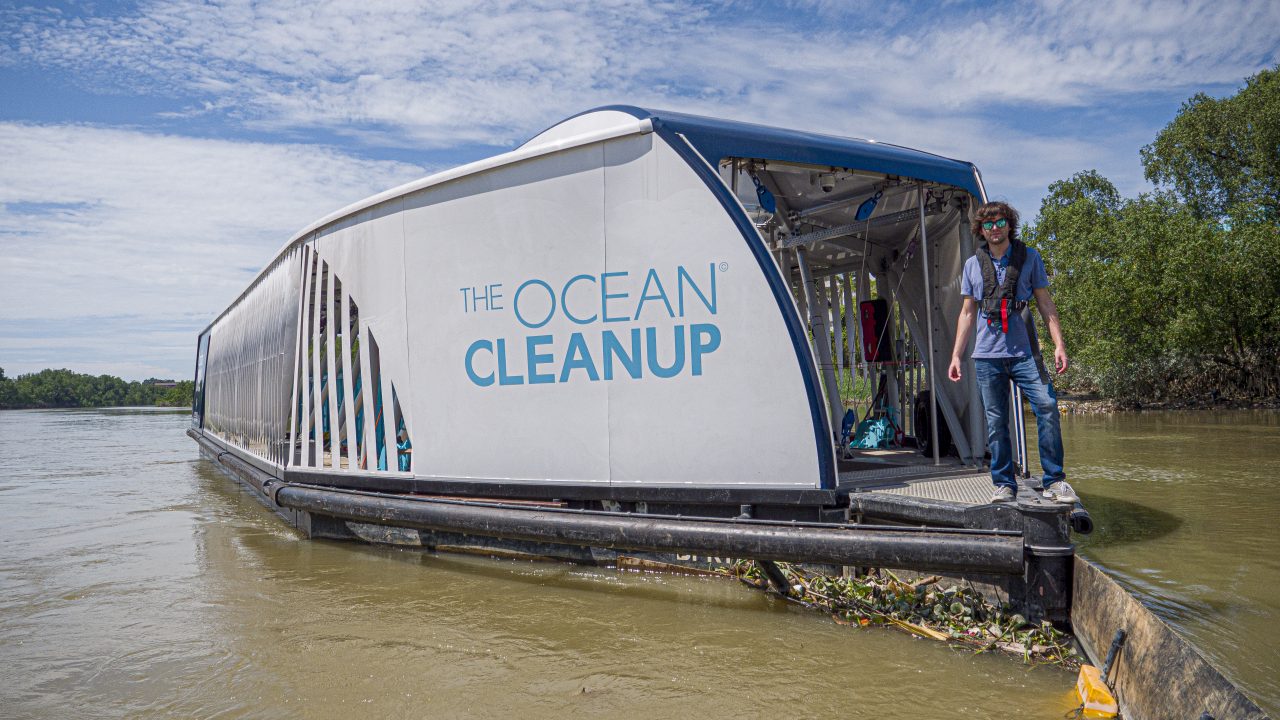 Floating trash collectors are stopping garbage from reaching the ocean

A nonprofit known as The Ocean Cleanup is continuing its mission of ridding the world of ocean plastic by catching garbage before it makes its way to the ocean. The organization has introduced new third-generation garbage Interceptors that it says can remove larger amounts of debris more efficiently and at a lower cost.

The organization is installing the floating machines in rivers. They intercept trash by directing floating garbage onto a conveyor belt that then drops the refuse into large dumpster bins onboard the vessels. A small crew later gets rid of the trash.

According to the International Union for Conservation of Nature, 8 million tons of plastic winds up in our oceans every year, threatening marine life and polluting ecosystems all over the world. The Center for Biological Diversity estimates that plastic waste will outweigh all the fish in the sea by the year 2050. The time to act is now. It will take an all hands on deck approach to curbing the plastic pollution crisis which should start with education and a fundamental change in how we produce and consume plastic.

The Ocean Cleanup Interceptors were first announced by founder and CEO Boyan Slat in 2019. The trash Interceptors are moored to river beds and use river current to snag debris floating on the surface. Then they direct the trash onto a conveyor belt that shuttles it into six large onboard dumpsters. The Interceptors run completely autonomously day and night, getting power from solar panels.

The amount of garbage and floating debris is constantly being monitored by the Interceptors’ onboard computers, and the trash is emptied daily by a small crew.

Slat via Zoom tells us more about the new Interceptor, which has a 2.5-meter wide conveyor belt to take out the plastic, one meter wider than on the previous-generation Interceptor.

“We’ve found that we can still further reduce the cost, the ease of rollout and the ease of assembly to really speed up the deployment as much as possible while also making it more efficient,” Slat said. “We found  [the previous Interceptor] often would clog when it comes to very large debris. So widening that will help also improve the reliability of the operation.”

The Ocean Cleanup has partnered with Konecranes, a Finnish manufacturing and logistics company, which will build 10 more Interceptors and help deploy them all over the world. Currently, The Ocean Cleanup has three working interceptors, installed in the Cengkareng Drain in Jakarta, Indonesia, The Klang River in Klang, Selangor, Malaysia, and the Rio Ozama, Santo Domingo, in the Dominican Republic.

These rivers are considered to be high contributors to the plastic debris flowing into the ocean.

“We need help when it comes to the manufacturing of The Interceptors, the servicing, and actually installing them in the rivers” Slat said. “These three things are what Konechranes will be helping us with.”

The Ocean Cleanup has set a goal to collect 500,000 football fields worth of plastic debris from oceans and rivers. As of now, it’s reached half that goal, mostly with the interceptors in rivers.

“Last year we collected over half a million pounds of trash,” Slat said. “That’s still a tiny amount compared to all the plastic that’s flowing in every year. We’re aiming for a much, much higher number this year.”

The river Interceptors have been a major success for The Ocean Cleanup’s mission, but Slat’s original goal is cleaning up the Great Pacific Garbage Patch with his other autonomous cleaning device, known as The Ocean Cleanup System. That’ll kick into high gear this summer, when the team will deploy and continue to test and upgrade System 002 in the Great Pacific Garbage Patch.

The Ocean Cleanup System and The Interceptors haven’t just removed garbage, both have come full circle by producing actual products out of the plastic they’ve captured. Last year the Ocean Cleanup unveiled its premium sunglasses, which are made of plastic that’s processed and pelletized to be molded into sunglass frames.