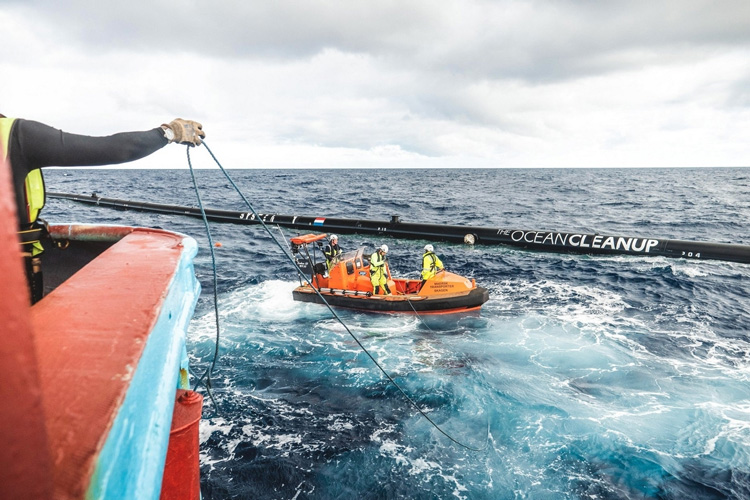 The off-shore crew of Ocean Cleanup discovered damage to an end section in December and had to wait for good weather to connect the system to a tug boat and begin the trek back to San Francisco. The return to port comes 116 days after the celebrated launch of System 001 for a couple weeks of testing followed by setup in the Great Pacific Garbage Patch

The plastic pipe-and-skirt system placed in the Pacific Ocean to corral marine litter needs repair for “structural malfunctioning” about two-and-a-half months after being deployed to the garbage patch halfway between California and Hawaii.

The Norwegian nonprofit Ocean Cleanup said in early January that its sea debris cleaner dubbed System 001 is being towed back to San Francisco.

A 26-foot section detached from the U-shaped contraption, which consists of a 2,000-foot-long high density polyethylene boom and a tapered polyester skirt attached below. The system was designed to gather plastic pollution from the ocean’s surface to a depth of 10 feet.

The off-shore crew of Ocean Cleanup discovered the damage to an end section on 29 December, then had to wait for an appropriate weather window to connect the system to a tug boat and begin the trek back. The return to port comes 116 days after the celebrated launch of System 001 for a couple weeks of testing followed by setup in the Great Pacific Garbage Patch.

Heralded as the world’s first large-scale ocean cleanup system, the group plans to collect the debris for eventual recycling if it can work out the bugs.

“Although it is too early to confirm the cause of the malfunction, we hypothesize that material fatigue … combined with a local stress concentration caused a fracture in the HDPE floater,” according to a Dec. 31 online update from Ocean Cleanup founder and CEO Boyan Slat.

Considered the backbone of the system, the floater, or boom, is made of buoyant and flexible high grade PE 100-RC resin. The two sections are stable and intact thanks to stabilizers that prevent rollover, Slat said, but some sensors and the satellite communication system were compromised so the decision was made to return to port.

In addition to addressing structural problems, the repair crew will “upgrade” the system to retain more plastic. Some debris had been eluding capture because the system apparently was not consistently traveling faster than the plastic, the Ocean Cleanup announced about a month ago. The crew is looking at ways to speed the system and studying the effect of currents and waves on plastics’ ability to enter the mouth for collection.

The cleanup system has collected some litter since being deployed Oct. 16, and is returning to port with about 2.2 tons of plastic, including fishing nets, Slat said. When fully operational, the system is expected to harvest about a ton of debris per week.

“Although we would have liked to end the year on a more positive note, we believe these teething troubles are solvable, and the cleanup of the Great Pacific Garbage Patch will be operational in 2019,” Slat said. “The fact that the cleanup system orients itself in the wind, is able to follow the waves well and is able to catch and concentrate plastic gives us confidence in the technology.”

System 001 was developed with experts at Agru Kunststofftechnik GmbH and its Georgetown, S.C.-based Agru America Inc. The system’s deployment followed years of Ocean Cleanup research and fundraising that generated about $35 million in donations and sponsors, including PayPal co-founder Peter Thiel.