Highlights importance and versatility of plastics as rugby season kicks off 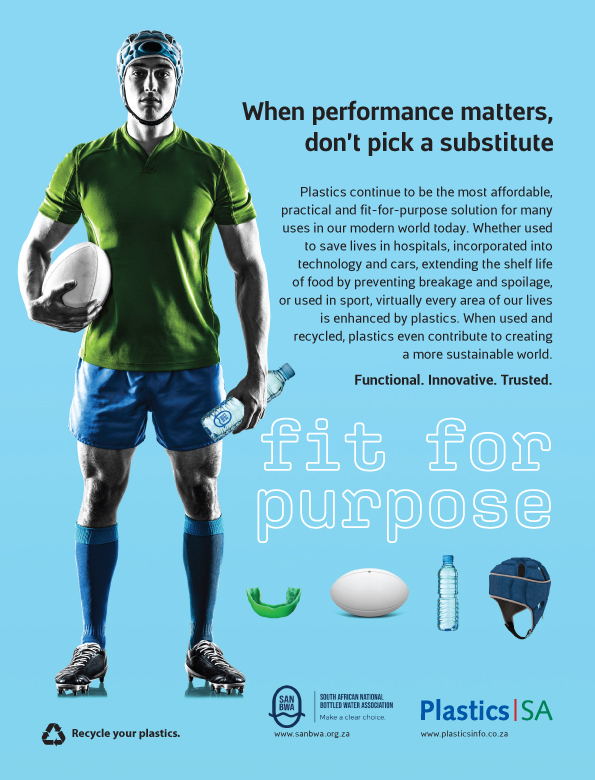 SOUTH Africans are gearing up for an exciting rugby season in 2022. After two years of limited games and spectator participation due to Covid-19, faithful supporters around the country cannot wait to get back into stadiums to show their support for their teams participating in the various local and international rugby matches that will be taking place over the next few months.

Conscious of the impact such large spectator events have on the environment, Plastics SA, and the South African National Bottled Water Association (SANBWA) have teamed up to raise awareness of the importance of using and discarding plastics responsibly. An advertising campaign to educate future sports players and enthusiasts will be published in SA Rugby Magazine, as well as online making use of the various social media platforms.

“Over the past few months, we have been educating consumers about the importance and versatility of plastics in our everyday life and the invaluable role it plays in modern society with our Fit for Purpose campaign,” explains Anton Hanekom, executive director of Plastics SA.

SANBWA Chief Executive Officer, Charlotte Metcalf, said that an increasing number of scientific studies are countering the anti-plastic wave that seems to have swept around the globe.

“We are living in an era where people are calling for alternatives to their plastic packaging without fully understanding the true impact these substitutes will have on the environment and their pockets. Ample research has proven that replacing plastic in consumer products and packaging with alternatives (that perform the same function) could increase the environmental costs as much as fourfold. It’s therefore important we keep a level head and don’t demand a change which might create more and bigger problems than the ones we are trying to solve. Buying food and beverages in plastic packaging that have been designed for recyclability – and then recycling those – is currently the best option for South Africa,” she commented.

One such a study published by Trucost points out that over 342-million tons of alternative material would be needed to replace the 84-million tons of plastic used globally in consumer products and packaging. This has major implications for costs and environmental impacts associated with manufacturing (such as raw material, energy, and water use) as well as distribution.

“For example, when we analyse its entire lifecycle, a water bottle (made from 50% recycled plastic) generates at least three times less carbon emissions than packaging made from alternative materials,” Charlotte advocates.

“We are excited about the growing collaboration between industries and role-players to clean-up the environment, encourage recycling and support collection efforts. As with any team sport, it is the way the individual players work together and support each other that ultimately determines its success. Plastics SA is grateful to work with SANBWA and other industry leaders as we step our efforts to reach greater audiences and effect lasting change,” Anton concludes.