Bowler Plastics’ CEO Friedl Sass and Mark Smith of Skye plying their trade at Propak Africa 2022. Their fathers worked together in the 1970s, now they continue the tradition of innovation and service to brand companies that lies at the core of plastic container manufacture 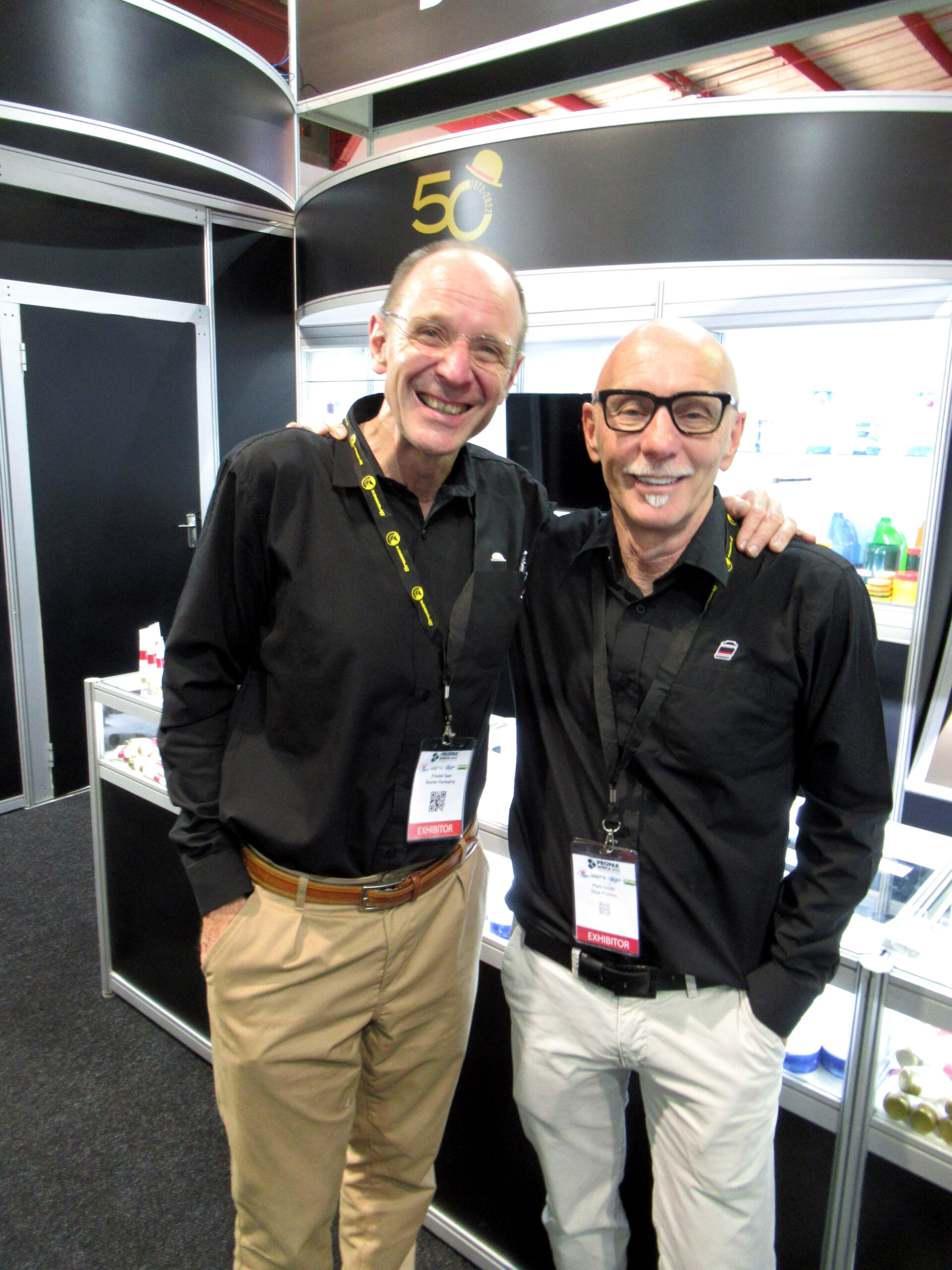 BOWLER group has completed its purchase of Skye Plastics of Johannesburg, creating a new expanded entity that will have the capacity and skills to set the benchmark for a one-stop-shop for exceptional service and quality in the small to medium sized rigid plastic packaging manufacture in Southern Africa.

Bowler group operates several production units around SA, including three plants in Cape Town, one in Johannesburg and a depot in Durban. The manufacturing sites will benefit from the purchase through the expansion of manufacturing capacities after the equipment has been relocated.

The changing packaging landscape influenced by EPR, and high import cost motivated the expansion of service, specifically the support of rigid packaging specialist Mark Smith who is welcomed back onboard the Bowler train.

Smith had been with Bowler from 2015 to 2017, bringing with him his unique skills of container development and ability to draw brand companies in and focus on boutique solutions. Here is the ‘movie director’ of the SA blow moulding sector, one who can provide everything brand companies desire and require – and make it fun at the same time.

Smith joined Skye after his stint at Bowler, teaming up with industry veterans Fred Morawitz and Cyril Shand, who duly gave Smith virtual free reign to upgrade and expand the Skye operation. Shand and Morawitz did have the foresight to provide the budget for capex, but it was nevertheless with startling speed and efficiency that several pieces of high standard equipment were commissioned, and Skye forged ahead.

Several new brand clients began to work with Skye and the business’s output must have undergone a major boost, in itself proving attractive to buyers. The dynamic and fast-paced service model for boutique solutions found a ready market in uncertain times.

And the relationship between the businesses goes back far further: Bowler CEO Friedel Sass’s father, Horst, and Mark Smith’s father Eric, worked together at Swiss Tools in Johannesburg in the pioneering era of the 1970s, during the roll-out of plastic blow moulding in South Africa. Sass snr and Smith snr, both now deceased, subsequently went their own ways. They pioneered the specific customised moulding approach which has been the success of the Bowler and Lapack brands. Both remained leaders in the sector throughout the rest of their working days, in healthy competition to the benefit of a vibrant packaging market

After gaining experience in the container packaging sector for close to 40 years, Mark Smith surely rates as one of the gurus of blow moulding in SA with a vast network to find answers for the brand holder and the fillers His history is probably of unusual interest for other reasons: He and father Eric thought they had hit the jackpot when they sold their business Lapack to what was then Boxmore International (now Alpla) in 2013, only for Mark to end up out in the cold after a contract dispute which resulted after the purchaser was dissatisfied with projected income for the business. After some time in the wilderness, Smith ultimately signed up at Bowler, which threw him a lifeline.

The new expanded Bowler business faces an exciting expansion opportunity. While integrating the Skye assets and contractual work into its proven high performing operations is likely to be a simple matter for an experienced and well-trained team combining a procedurised and well organised high volumes operation with a small and diverse product “one-stop-shop” operation may not be such a simple matter. For that reason, the Skye brand will remain a separate focus within the Bowler stable satisfying that particular niche.

Accordingly, Smith as GM will focus on satisfying the expanded customer base on various standard solutions for small volumes packaging requirements in the fast-paced FMCG market The Skye warehouse will remain the facility for trading and office of SkyePackaging.

Bowler has some real market advantages, including those of producing its own masterbatches, ability to digitally print tubes (which apparently has seen a considerable increase in popularity, particularly for short-run contracts) and most recently also that of digital printing of in-mould labels, which likewise has the potential to appeal to short-run production for medium to small brand businesses in the cosmetics area, specifically for tubs (see article on page 15)

Little is known of Skye, but it appears that the company’s former focus on the agriculture, medical and chemicals sectors have since 2017 also expanded into the personal care sector. Both companies have over the many years built a substantial library of moulds and packaging solutions. These ranges are in PET, PP and HDPE and provide the market with proven solutions off the shelf, thereby aiding customers and market entrants to develop their brands without the risk of high mould costs and with the ability of fast entry into the market.  SkyePackaging has been trading since 1 March 2022.