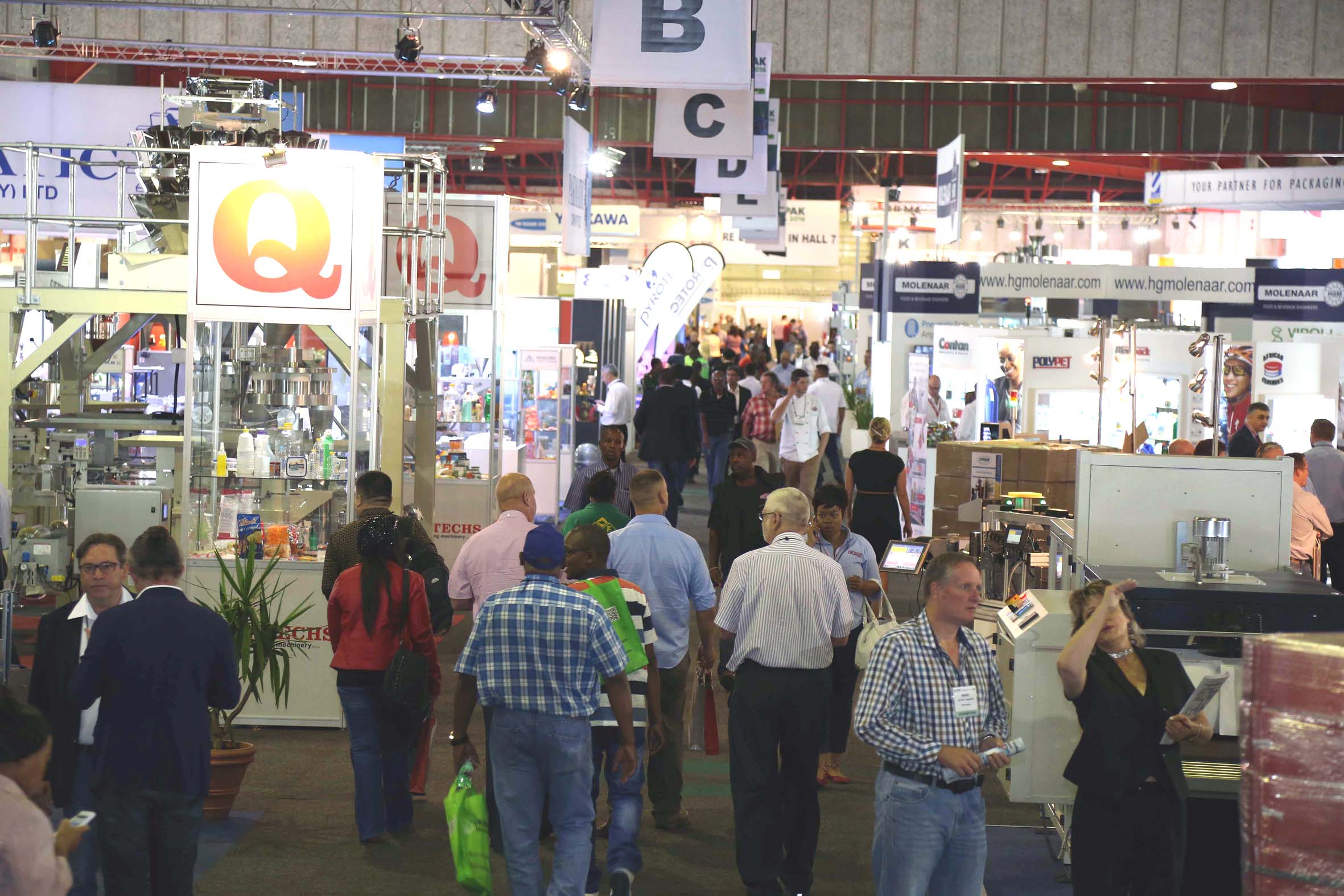 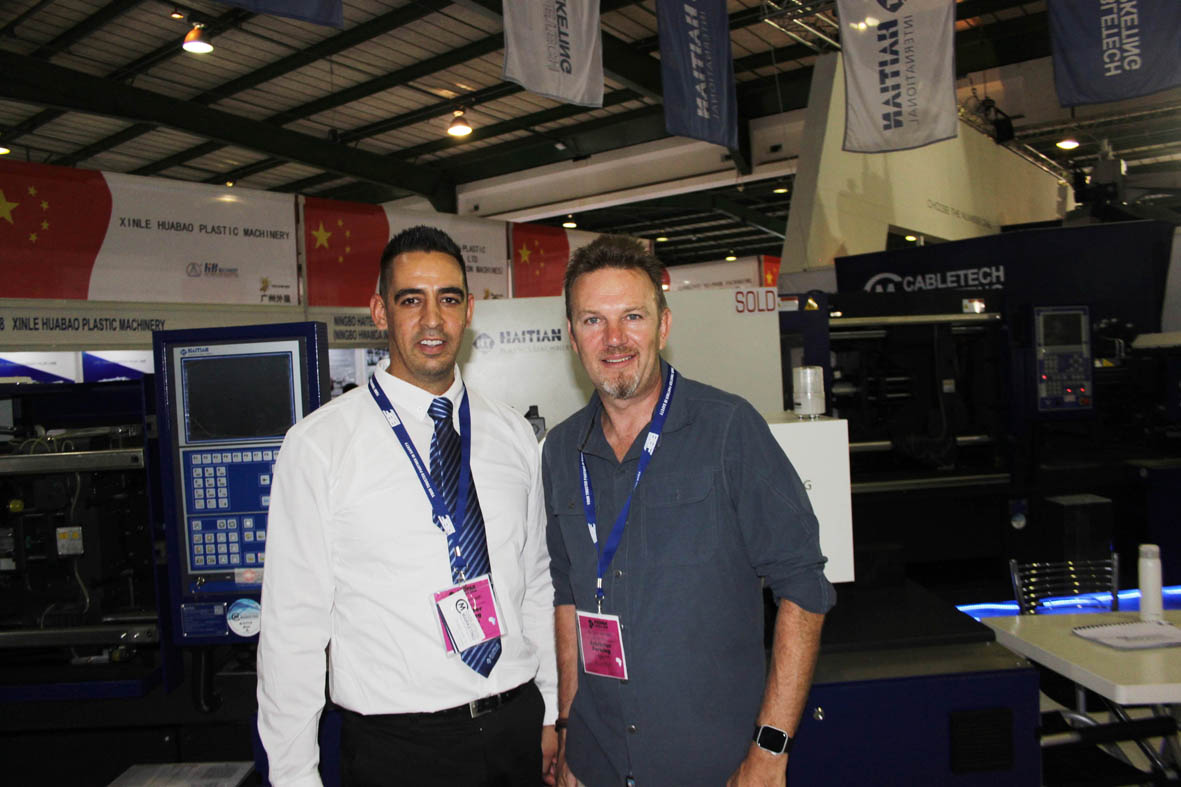 Justine Lombard on the Brenntag stand at Propak Africa showed off some of the automotive trim materials manufactured by LyondellBasell and supplied by Brenntag. The Alumatt® metallic pigment compounds, which achieve high gloss effects and eliminate the painting process. Other products on display were made from the LyondellBasell Softell® range, which replace painted polymer, foil and soft polymer applications. Products moulded in Softell have low gloss, scratch resistance and a great haptic effect. Softell® also includes textile grades which replace hard plastic + textile covering with a one-shot injection moulded solution 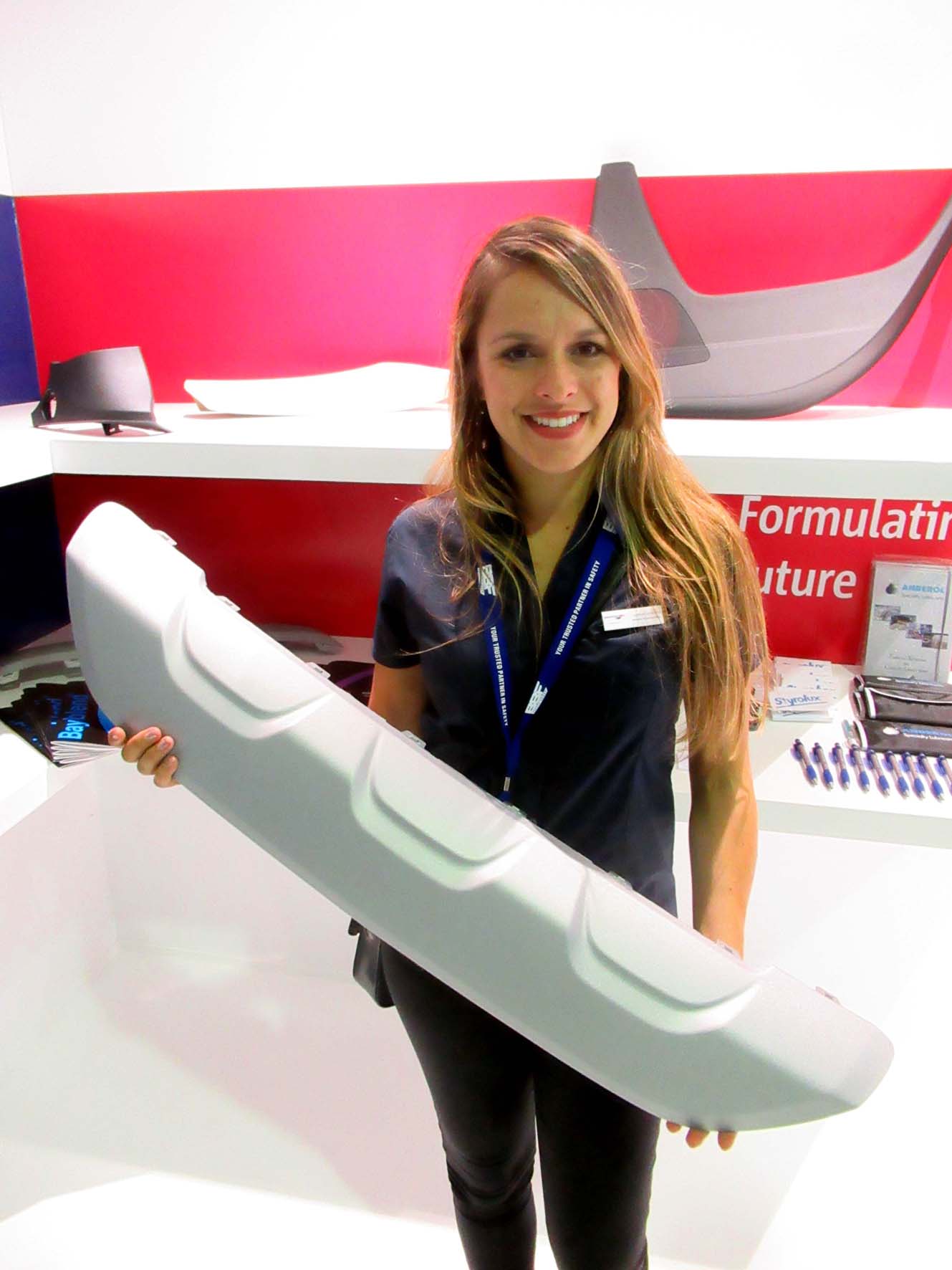 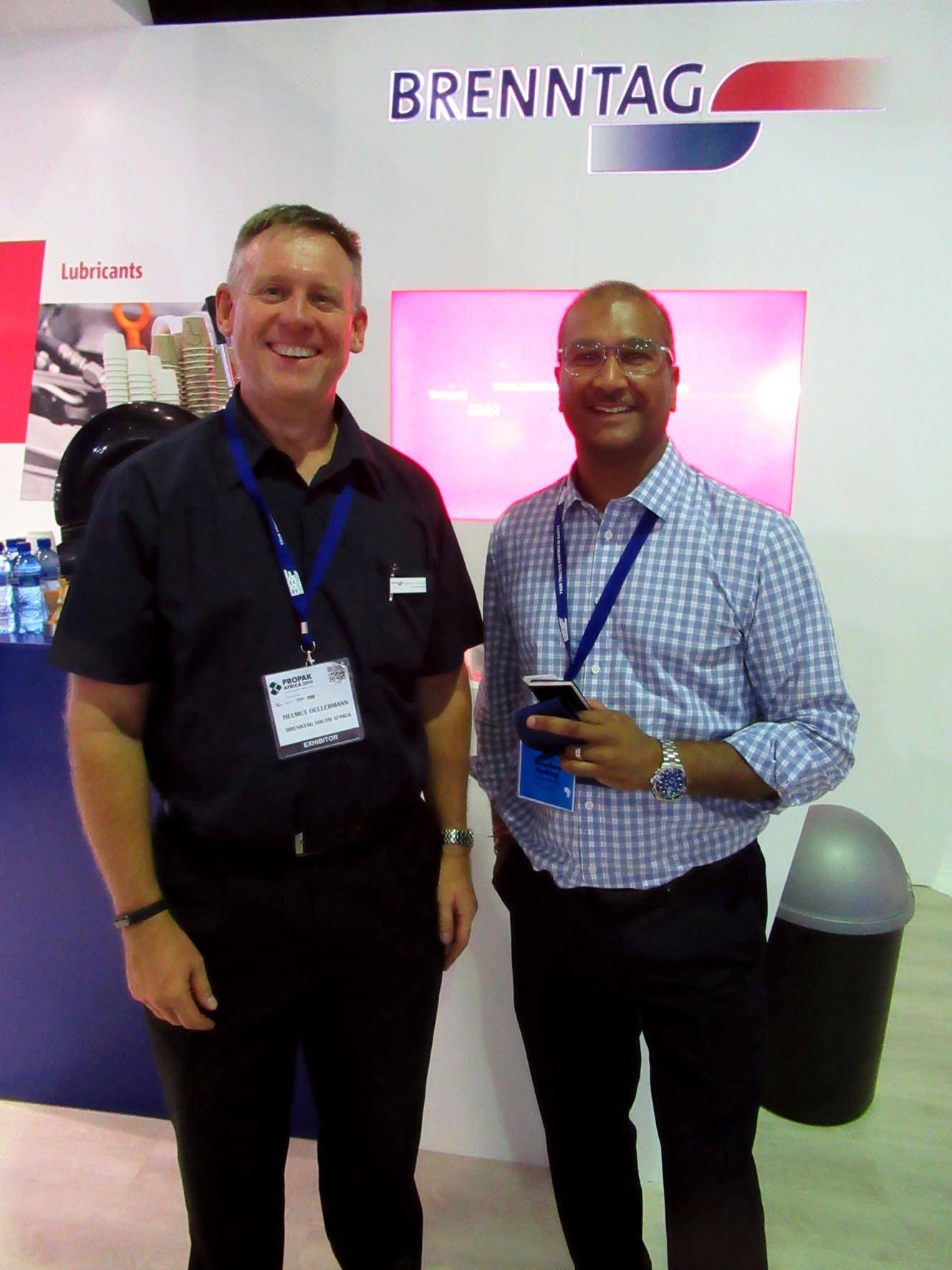 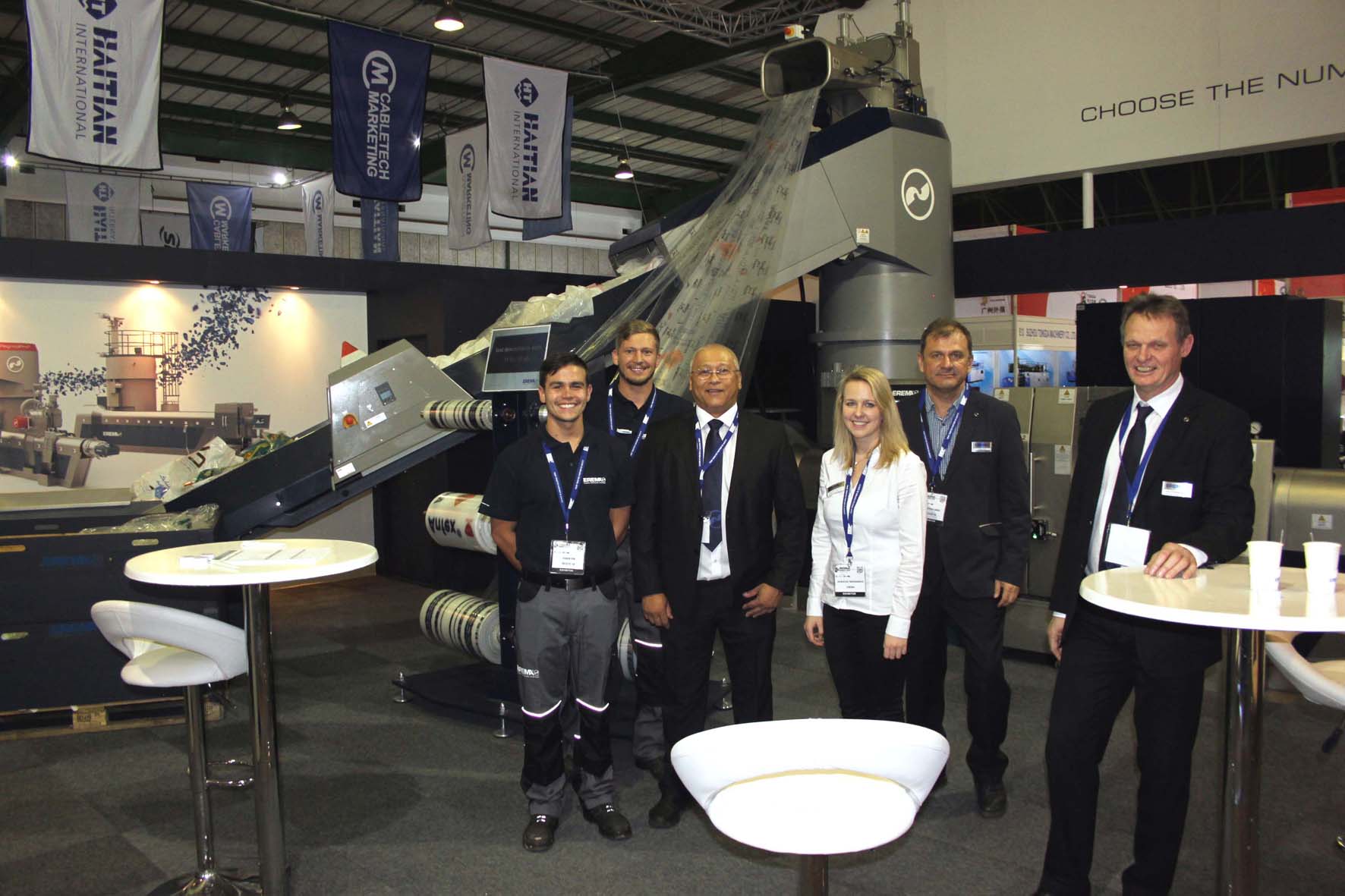 Ramon Scheepbouwer, Andrea Goldsmith and Deon Cross were on call on the ExxonMobil stand. They offered Exxon branded rugby balls, which made them very popular for the four days 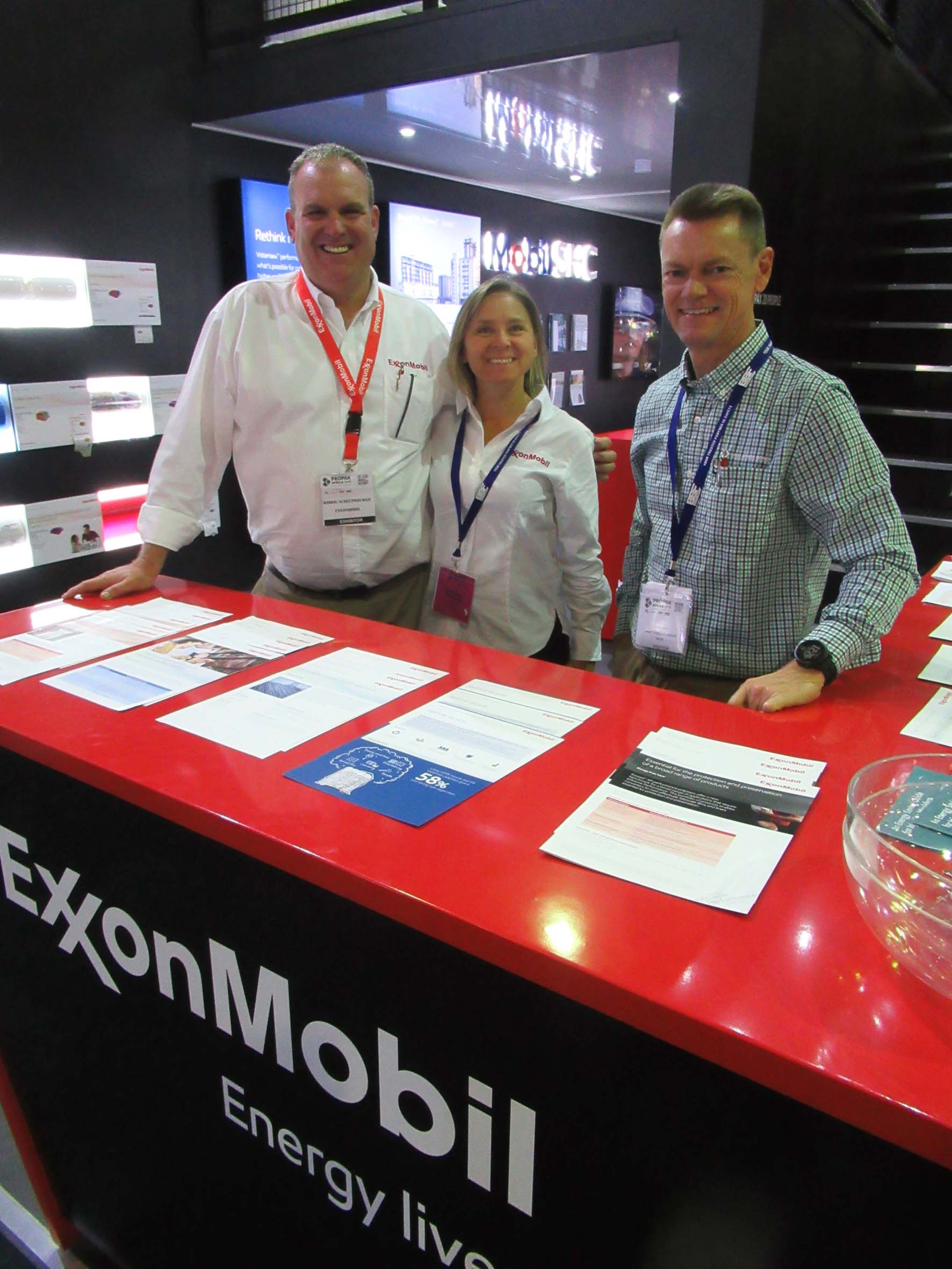 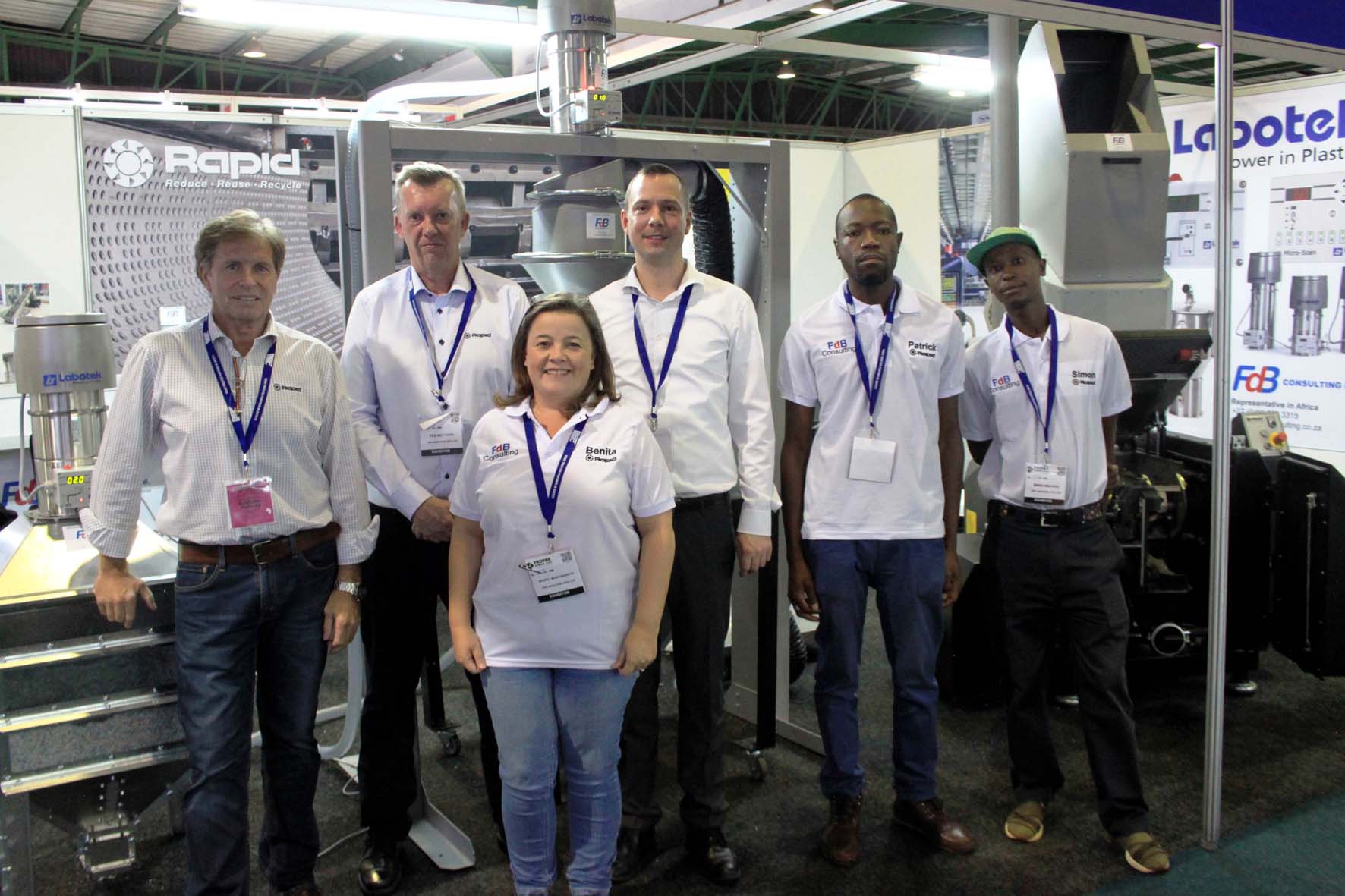 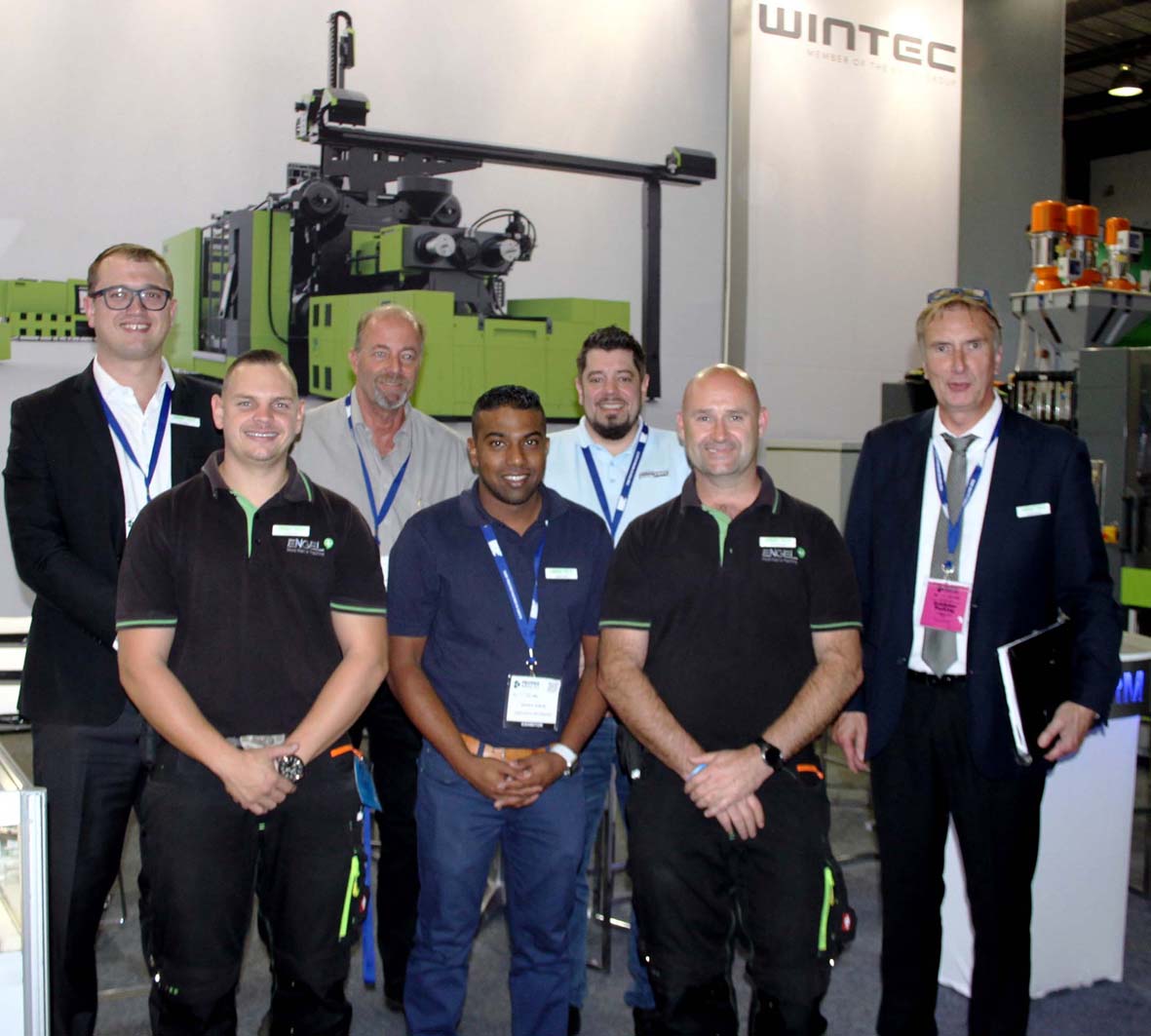 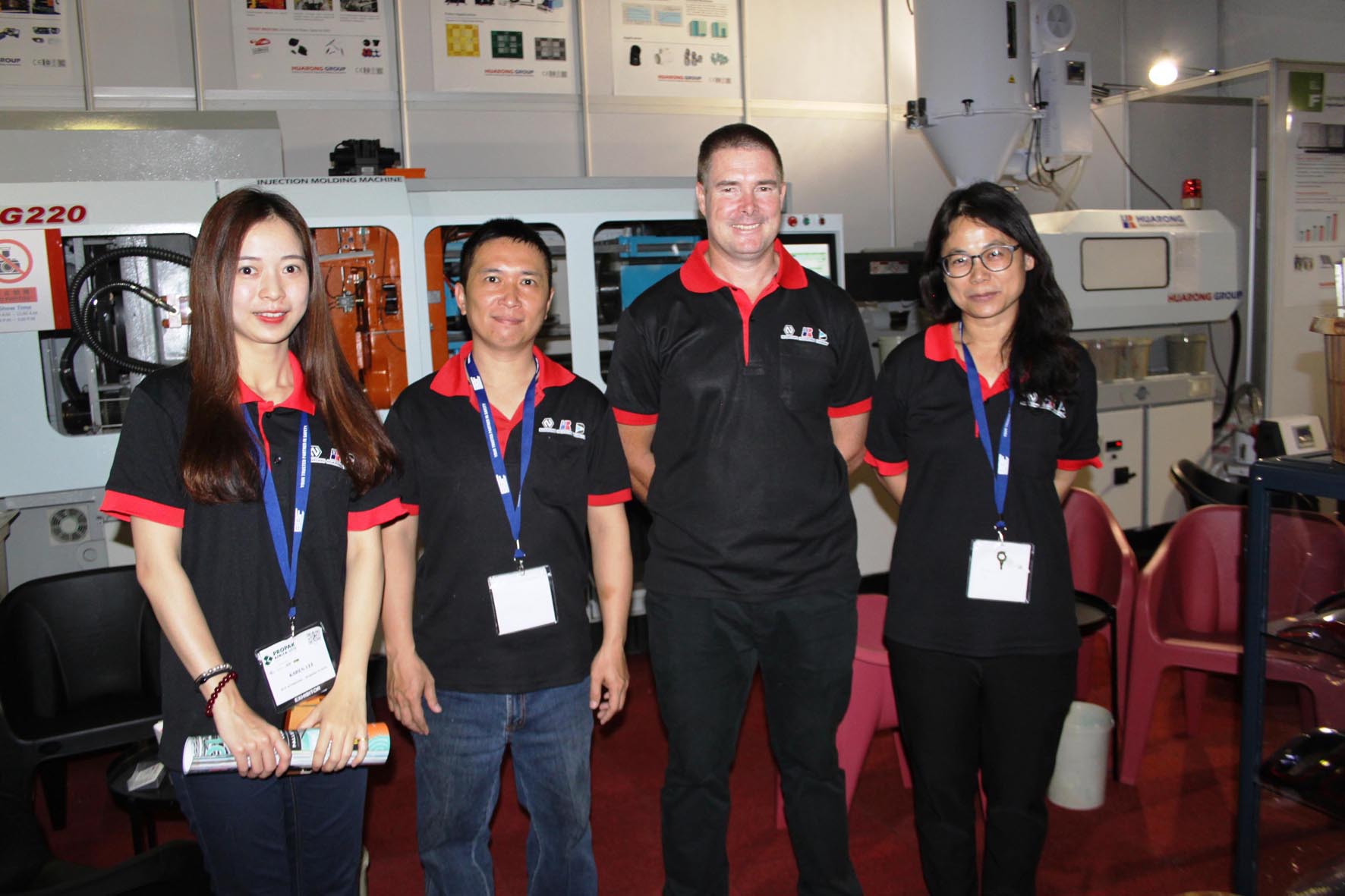 Tamryn and Greg Gerasimo on the Maritime stand 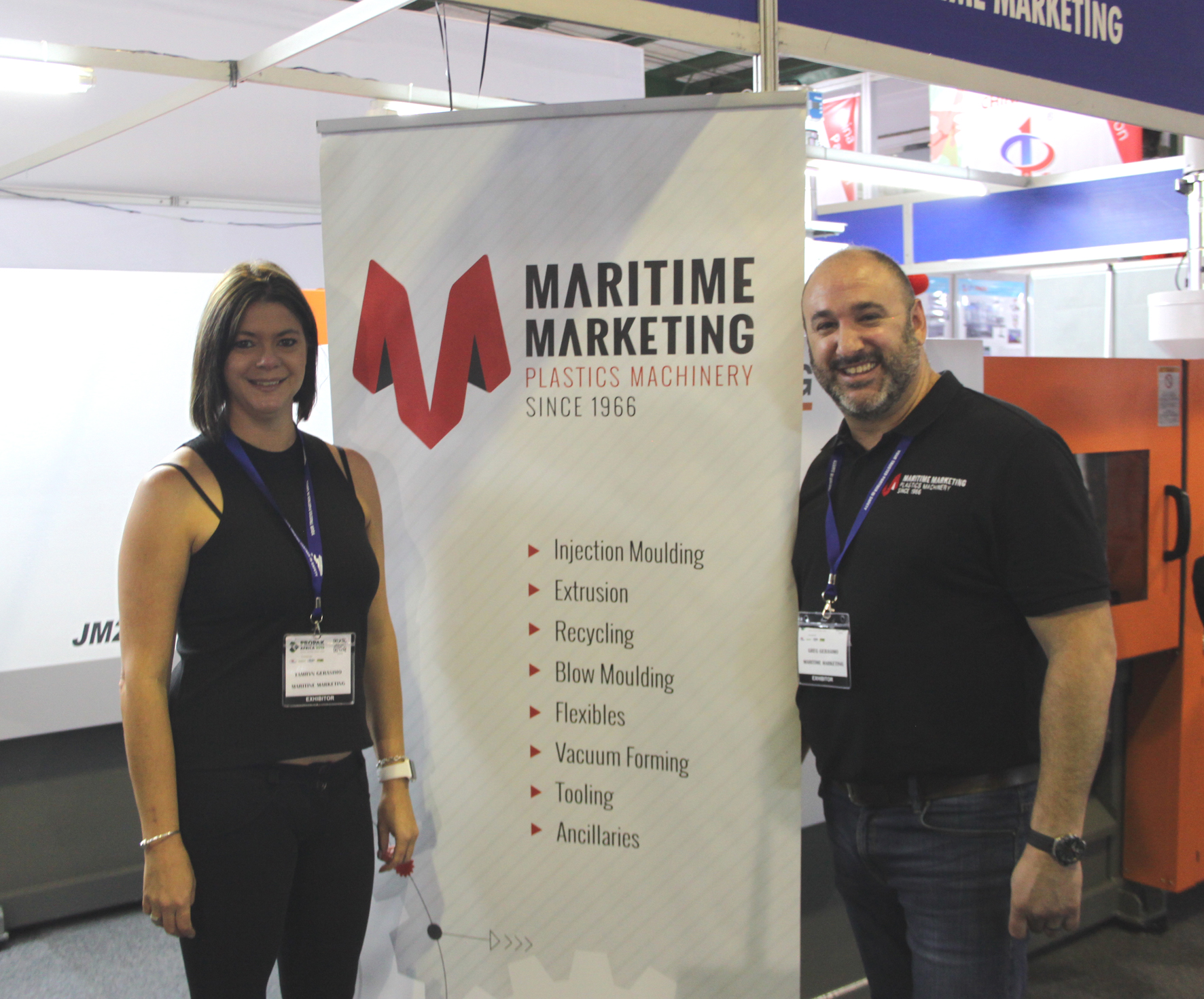 Born with a spoon … Quite right, one the latest 500ml ice cream tubs from Polyoak comes with its own spoon, which appears to have proved popular for the brand concerned. The spoon is injection moulded separately with a design that allows it to be clipped on to the underside of the lid 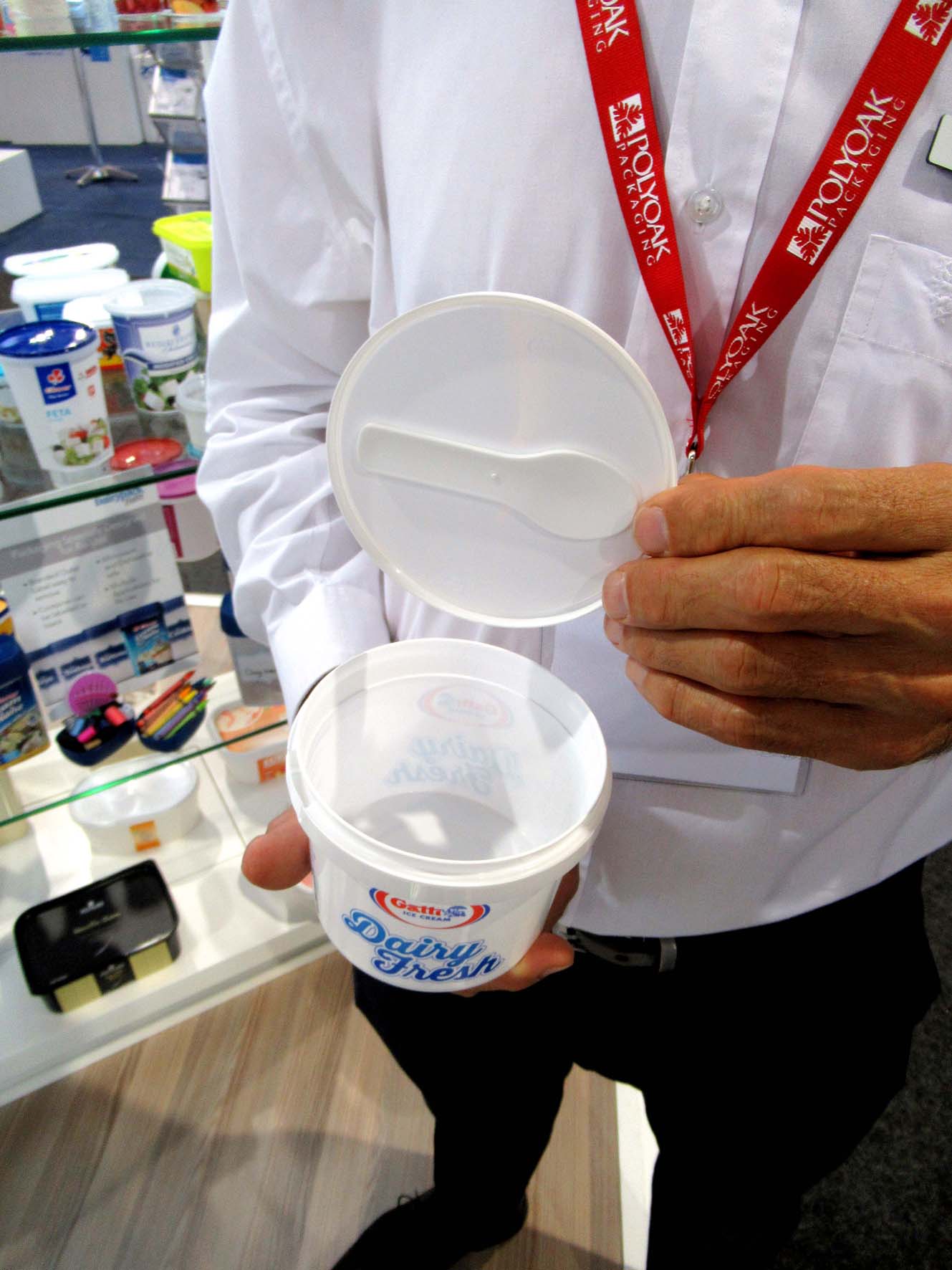 Rawmac’s Herman Botes, Jeremy Goosen, Pam Magill and Anna Mohale hosted a comfortable lounge at the show, which was a nice place to meet and relax, thanks team! 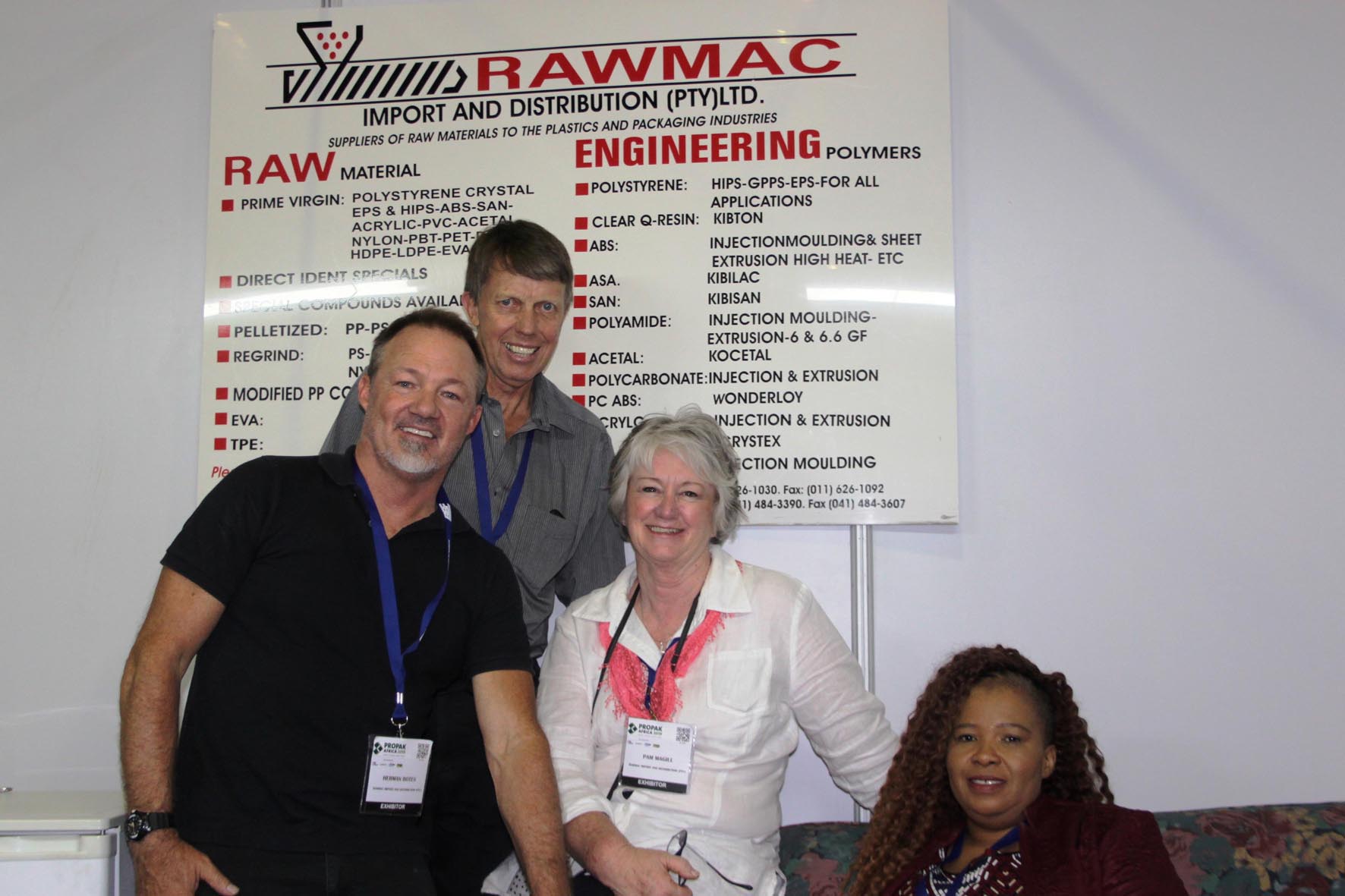 Gerhart Mischinger (right) of Technimac managed a joint stand involving the Guenter-Contec group, of which his company is a member, and Technimac’s principle Rajoo, who were represented by Bhairav Prajapati and Jinesh Shahd 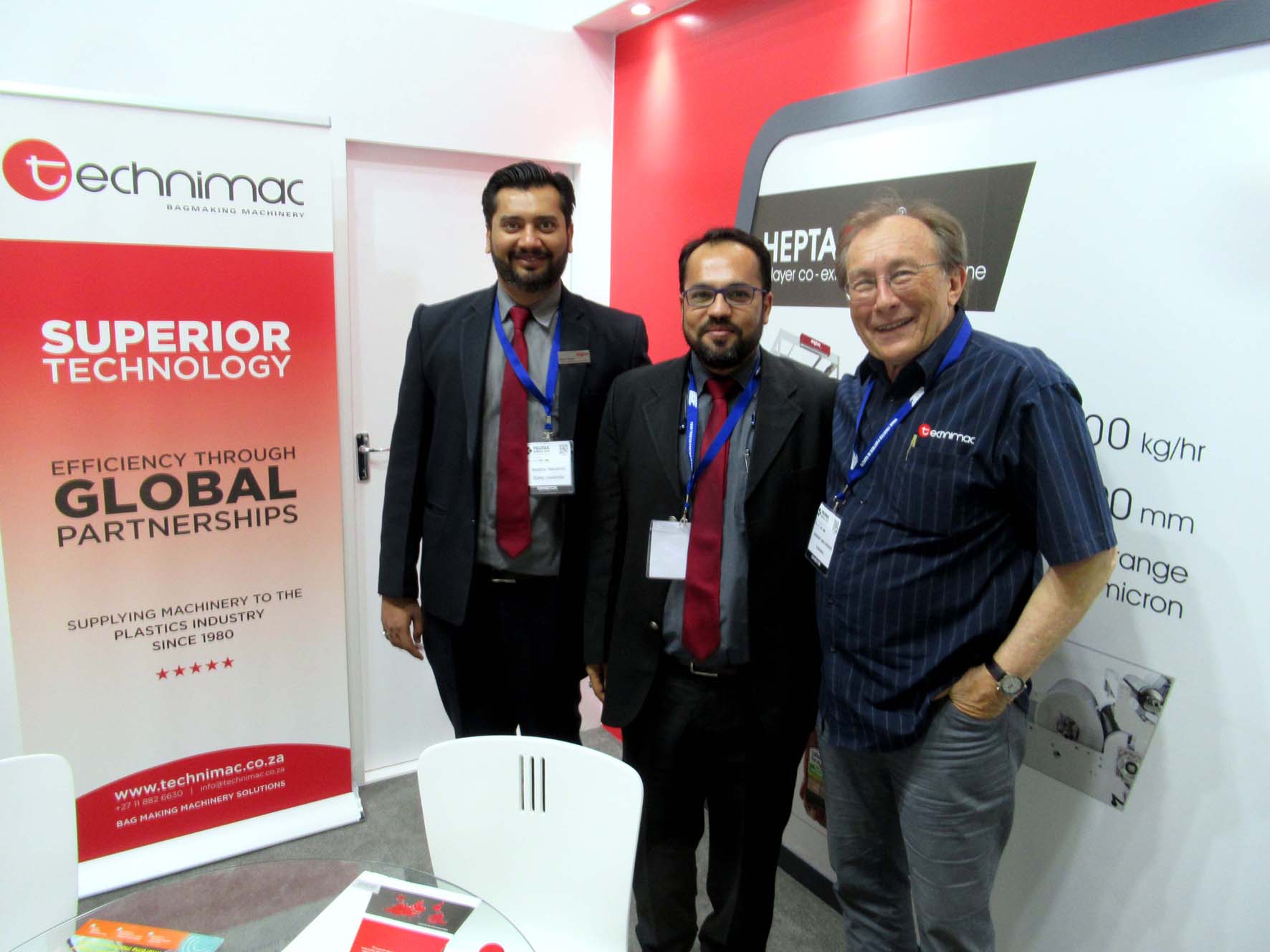 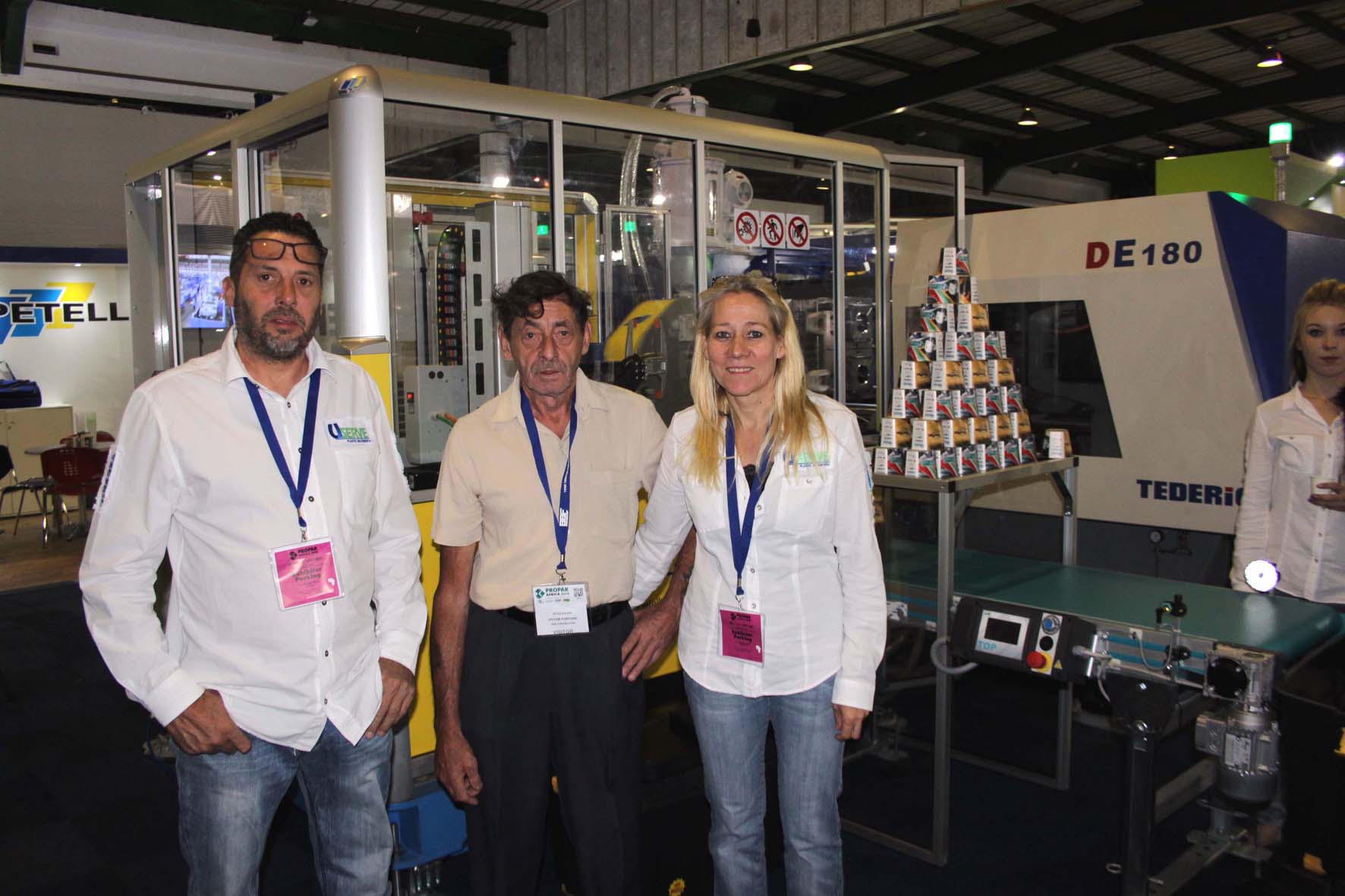 Ritesh, Uday Shah and Jignesh Patel of Vishva Exim, as always, showed some new technology. On this occasion the Indian team were focusing on an in-house recycling system they’ve developed 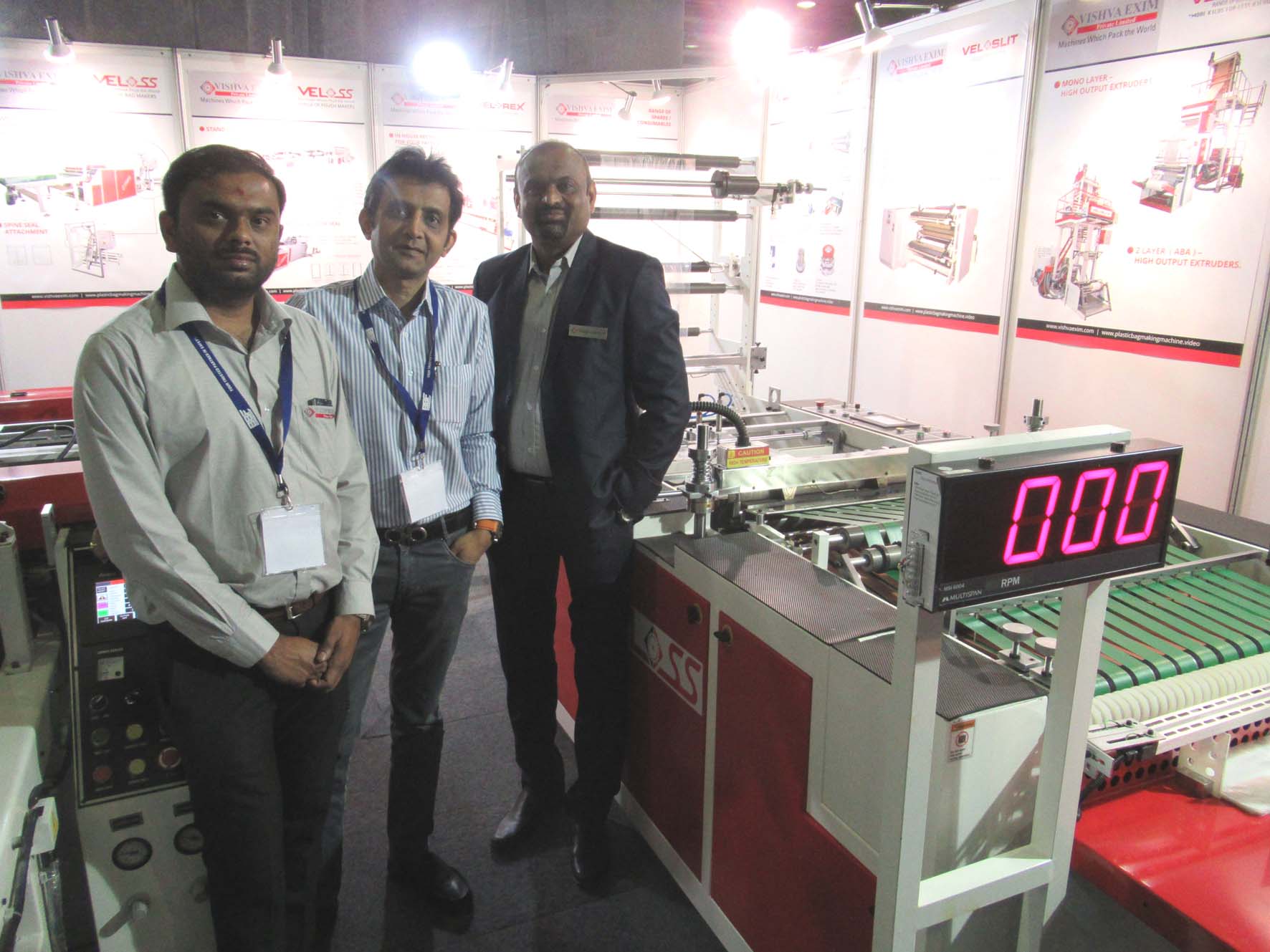 Johan Dreyer of Enviro Lamps (blue shirt) of Honeydew bought this complete Yizumi PAC 250K injection system, including mould and robot from the Chinese manufacturer, supplied by Mouldbase SA. Here we see Andy Lau, Arrie Lourens and Wesley Lau (on the left) with Dave Moore and Annette Varrie of Mouldbase of Durban; Enviro Lamps manufactures a range of lamps that are described as the ‘world’s best alternative to candles’. It already operates a number of the Yizumi systems 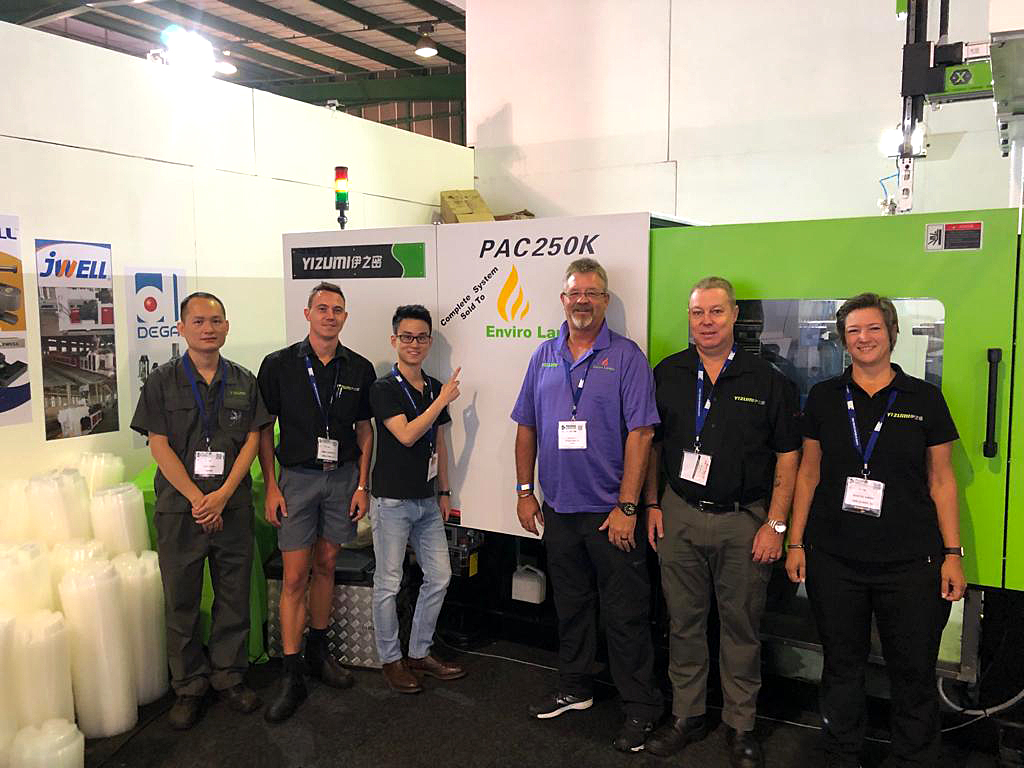 Bart Schurink and Peter Cawcutt on the ZA Machinery stand 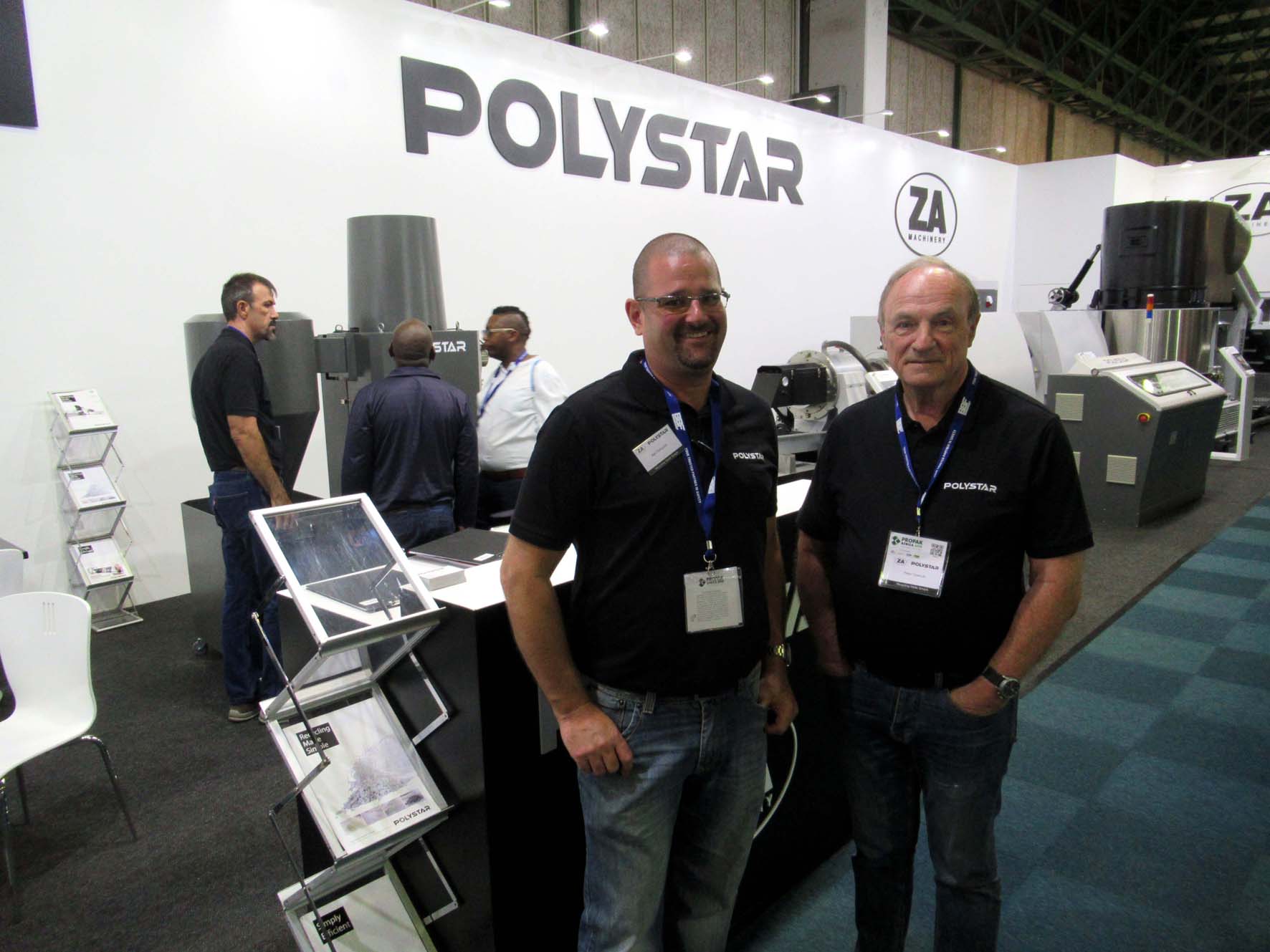 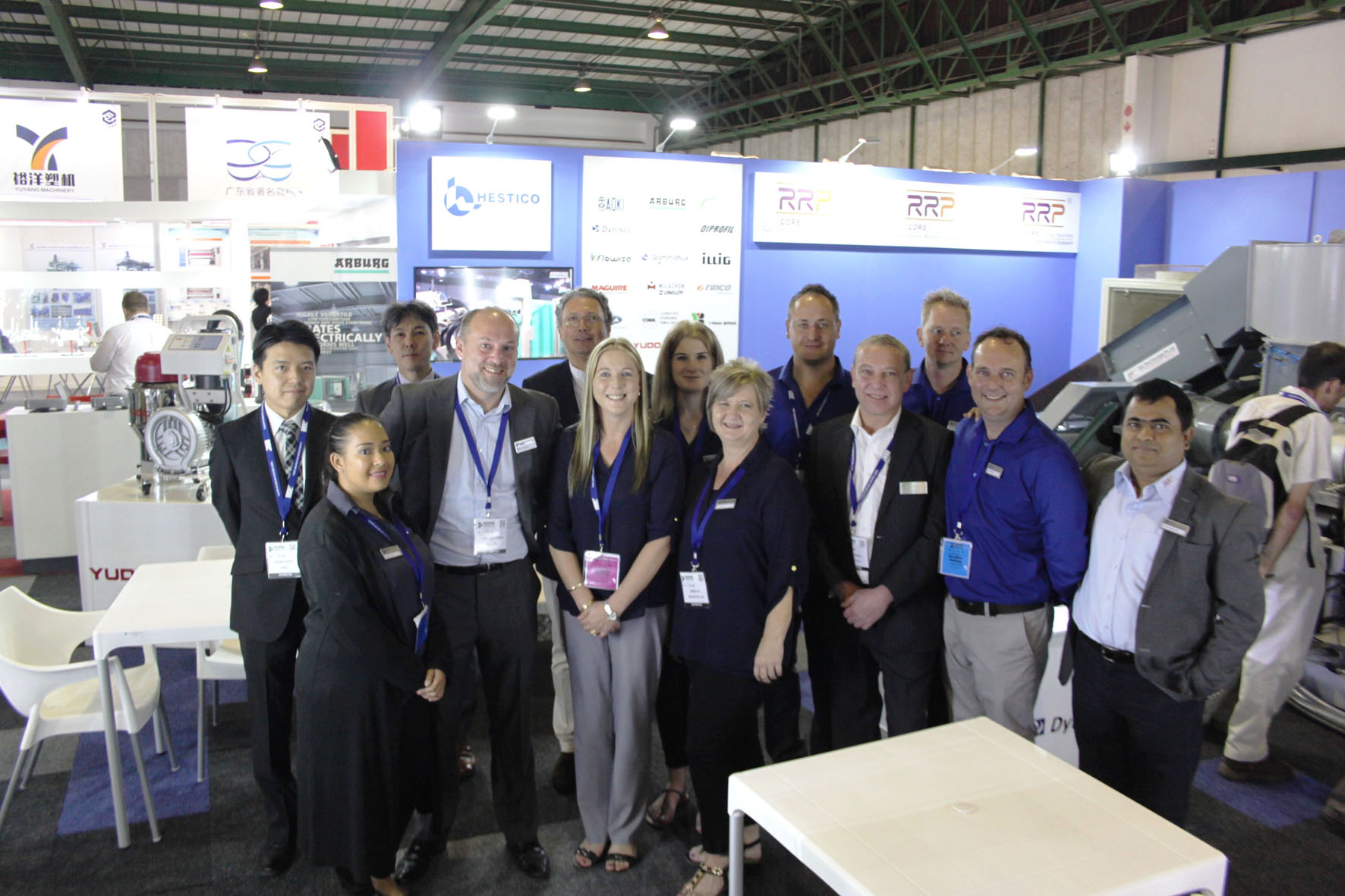 Held from 12-15 March at the Expo Centre in Nasrec, Johannesburg, when it came to quantity and the quality of visitors, this year’s Propak Africa really packed a punch with exhibitors nodding their approval and giving the show a big thumbs up. Visitor numbers totalled 11 792, an increase over the previous show edition.

Noticeable trends were an increase in the number of visitors from Africa, with Botswana, Zimbabwe, Zambia, Namibia, Mozambique, Swaziland and Lesotho leading the way. The growth of green technology was visible on many stands.

Not only did exhibitors like the number of feet coming through, they liked the quality of the feet too. Testimony to this were the number of sales done at the show – and the speed of the sales, some of which happened a mere two hours into the show.

Increase in sales done at show

“We sold four machines within two hours of the doors opening,” says Graham Finke, MD of Trempak, while Pierre Jurgens, MD of Cabletech Marketing, says they had sold nearly everything on their stand by day three.

Filmatic had the biggest stand in its 25-year history of attending the show. CEO Riaan van Zyl says it paid off. “In the first two days we were up 25% on the previous show. A day later nearly all the equipment we had on the stand was sold – and there was almost R40-million of equipment on show.”

“This is testimony to the organisers getting the right people through the doors. The increase in good quality of visitors to the show has been impressive,” added Tomsett.

He wasn’t the only one impressed.

“We were also pleasantly surprised by the number of new customers we came into contact with at the show,” said Qualitechs’ Chris King.

Pakmatic director Ray Shaftoe is an old hand at the show, but this year’s event introduced them to some new customers: “Propak Africa is a staple show for us, we’ve been coming since it was hosted at the University grounds.

“This year we met customers we had no idea existed prior to the show.”

Pakmatic also had an inquiry from Zimbabwe, one of many from Africa that had exhibitors excited, including newcomers to Propak Africa such as Alsitype Pharma Technologies. The company’s business manager, Janice Kruger, says they had interest from neighbouring countries such as Botswana and Zimbabwe.

“We are a fairly new company in terms of the equipment division, so the show has provided the opportunity for our customers and new customers to see our equipment first-hand. A brochure is one thing but to see the machine in action is totally different,” said Janice.

Green technology is a trend that has picked up since the last Propak Africa, both for exhibitors and visitors. Relloy SA GM Candice Toi says this was a focus for them.

“We had a recycling machine on display and we actually sold the machine at the show to a customer in Botswana, and another one to a local customer.”

Hestico MD Juanita Stiehler-Brits agrees. “This year we took a bigger stand and used it to show a recycling line. The movement on the stand attracted so many visitors and we actually sold the line at the show to a new customer!”

Event director Sven Smit says he is delighted with the success of this year’s Propak Africa and enthusiastic that all stakeholders benefited over the four days of the show.

“We offered several exciting new initiatives that were of benefit to visitors to Propak Africa 2019,” says Smit.

“For the first time there were free-to-attend seminars taking place daily at the show, presented by expert speakers and the content was aligned to the show’s ‘four days, four themes’ topics. The themed days were also part of our new initiatives,” he says.

Other new initiatives included a Sustainability Pavilion, a Skills Development Area and a display of the Institute of Packaging SA’s Student Goldpack Award-winning entries – a window to future innovation. Four industry conferences also took place alongside the show.

By the time the doors closed on Propak Africa 2019, almost 40% of exhibitors had booked space for the next show in 2022.