The need to create a solution where caps remain attached to the container during the use of the bottle is a major challenge for the plastic container manufacturing market. Alessandro Falzone of SACMI, a leader in this sector, looked at a number of solutions which have already emerged. The intention of the pending EU legislation is reduce the environmental impact of caps and containers
Chat panel – A Sustainability Panel discussion was presented near the end of the event and here, with Safripol host Gert Claasen, are the protagonists, Eddie van Os (Polyco/Unilever), host Prof Linda Godfrey (CSIR), Cheri Scholtz (Petco) and Douw Steyn (PlasticsSA), who presented a lively discussion 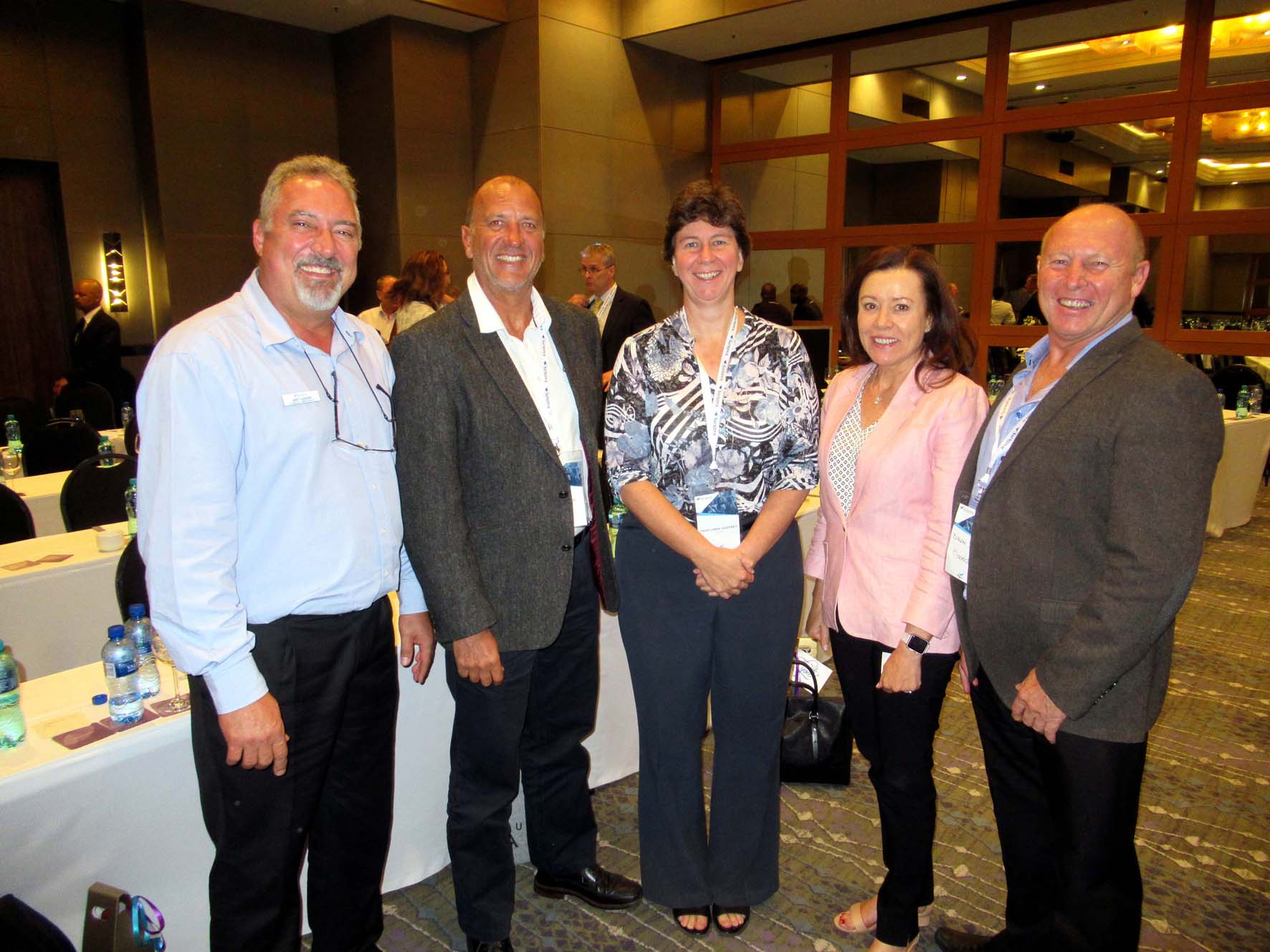 Zero cooling – The ‘Zero Cooling’ preform system from Nissei ASB achieves a significant production rate increase, of about 50%. It utilizes a slightly different preform design: the unit on the left has a thick wall section and high stretch ratio, whereas the standard preform (on the right) has a thinner wall section and low stretch ratio 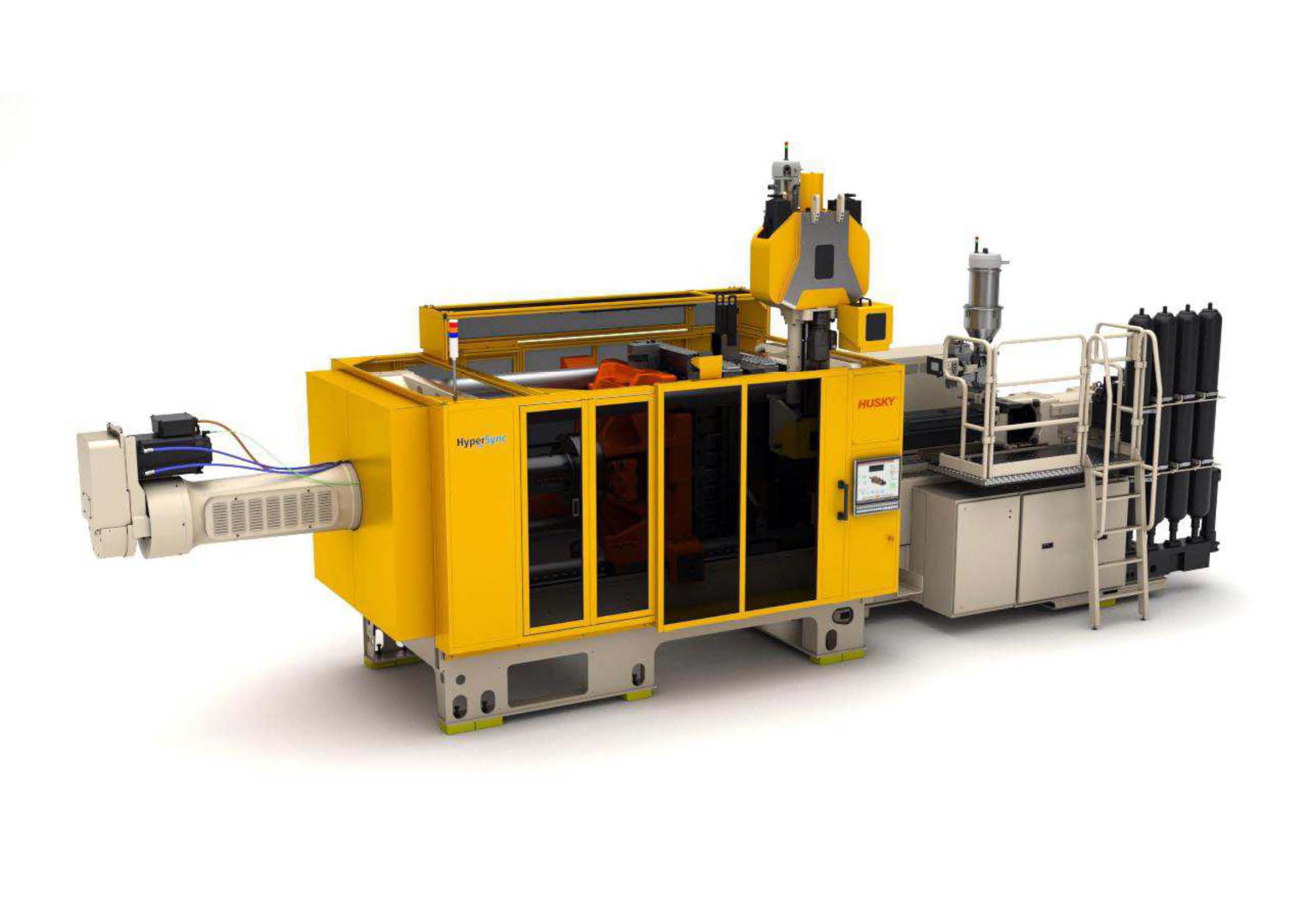 Packaging, PET and pipe in focus at Safripol indaba

SAFRIPOL upped its game a notch with the hosting of its first technical conference in Johannesburg in late-February, a two-day event attended by some 150 industry managers involved in the key areas where the now more diversified group is involved, packaging, pipe and PET.

According to Safripol technology and innovation executive, Gert Claasen the goals of the conference were to indicate that Safripol is a committed preferred polymer partner to the South African industry and to “ensure that we as an industry work together for sustainable growth”.

The aim was also to share new technologies and trends and in this context the show presented an excellent opportunity for convertors to meet a number of global technical partners who are leaders in their fields of expertise, including presenters from market analysts Townsend Solutions and Euromonitor, material manufacturers Qenos and PolyOne and additives manufacturer Milliken; and machinery manufacturers Husky, Illig and SACMI.

The event kicked off with keynote speaker Dr Roelf Botha, whose candid and insightful views once again didn’t disappoint. According to Dr Botha, who really worked up a head of steam on the day, there would be at least some capital left for RDP constructon and job creation in South Africa if only the state-owned enterprises “could just stop making losses”, which is some understatement.

As a guest speaker, Dr Botha is outright value for money and does not scare away from highlighting the many political shenanigans at play, constantly, in this country and particularly as these continue to bedevil economic development. But the economist was also pragmatic and did mention a few economic positive signs.

The presentation by Stephen Moore of Townsend Solutions, a USA-based global market research group focussed on the petrochemical industry since 1977, looked at how the growth in the shale gas sector, specifically in the USA, has fundamentally changed the polymer landscape. Until relatively recently, the conventional petrochemical route had obviously favoured areas with large oil reserves, with ethane in Saudi Arabia giving that region a major ethylene feedstock cost advantage. As feedstock derived from oil or natural gas can equate to up to 70% of total costs, all the other manufacturers were at an obvious disadvantage, although polymers manufacturers in the USA, Europe, Korea and China had other competitive advantages.

“The shale energy revolution has quickly grown US hydrocarbon production this decade and will continue to change the price correlations between natural gas, NGLs and crude oil,” said Moore, who is based in Singapore.

Shale has had such an effect that it has “disconnected” oil and gas prices, he added.

Shale NGLs (natural gas liquids) produce between 42-65% ethane after fractionation which has resulted in most new crackers in the USA to be 100% ethane-fed now. The rise in the price of ethane since 2016 has meant that Saudi ethylene prices are now far closer to those in the USA.

What does this mean for convertors in Southern Africa? The simple fact of the matter is that the heightened competition by the increased viability of shale gas will ultimately have a balancing effect on global polyolefins prices and the global price is what it is, so don’t expect any favours.

Caps will have to remain attached

Among the most interesting presentations, that by Alessandro Falzoni of SACMI of Italy was of most relevance. SACMI is established as one of the leaders in the closures market globally and a significant number of its injection and compression moulding machines are in operation here.

“For the last 10-15 years, the focus of our industry was light weighting: reducing packaging weight (bottles and caps), without affecting performance and consumer experience. The industry collectively spent millions, but reduced resource and energy consumption, CO2 emissions to levels unthinkable when the whole process started,” said Alessandro.

Cap weights declined from over 5g in 1994 to 2,4g and even lower last year, which was a notable achievement.

However, another new major change now awaits this sector: in the European Union, legislation is about to be passed which will obligate manufacturers of single-use plastic products with caps and lids to ensure that the caps and lids remain attached to the container during the product’s intended use stage.

Potentially substantial development costs lie in store for SACMI and the convertors it supplies, with patent and possible infringements thereof being an obvious further problem (how many different solutions for this difficult problem can there be?).

Ironically, the EU countries in which the legislation is to be applied, in Western Europe, are among the lowest polluters on the planet.

Fabrice Becker of Husky gave a presentation about Husky’s co-injection systems for single-serve capsules, specifically as used in the coffee market. The market is massive, estimated at about 60 billion units a year – and that market is almost exclusively established in North America (37%) and Europe (60%) and the rest … well, Asia/Australia account for just two percent, Latin America even less at a single percent and Africa even less still, at less than a single percent. So if you think the coffee shops in your area are busy, think again: the whole of Africa accounts for less than a single percent of the global market.

Lavazza of Italy with a plastic injected solution and Nestlé of Switzerland with an aluminum design introduced the coffee capsule some time back, in 1988 actually. A thermoformed plastic solution was introduced by Keurig shortly thereafter and the thing caught fire from that point, leading up to what is today a truly massive market.

For the record, Nestlé is the outright world leader with its Nespresso brand. It’s followed by GMCR’s ‘K-Cup’ and is also in third place with the Nescafé ‘Dolce Gusto’ caps.

But kudos to Husky, they have forged ahead with multi-layer co-injection technology and in the process become one of the leaders in this highly competitive sector. Its PP/EVOH/PP technology has the obvious advantage of keeping oxygen, light, odours and moisture out while extending shelflife. It has developed over 40 applications and builds multi-cavity moulds up to 72-cavities.

Besides capsules, Husky has applied its technology to the container and closures sectors too. Other material configurations are utilized too.

According to Enrique, who’s involved in analysis of consumer behaviour, brand companies today need to and are becoming more aware of consumers’ “emotional connection” with products, something which was not really delved into until quite recently. The concept that manufcturers can create “new sensorial experiences” through their products, and thereby boost consumer loyalty, has also not seen much air.

The three top mega trends shaping the packaging industry, he said, include ‘Experience more,’ ‘Healthy living’ and ‘Ethical living’. Comparisons between different consumer groups, especially in comparison to the ‘millennials,’ are obviously of interest and relevance, but consumption stats are arguably the most telling. In this respect, he used the example of PET container consumption to illustrate global packaging trends. Not surprisingly, Asia-Pacific consumption was outright the highest: demand in 2017 was estimated at 193,9 billion units – which is a serious figure, but just as astonishing is the fact that North Americam demand was significantly lower, at 96,8 billion it’s almost exactly half. The major demand in Asia-Pacific is, not surprisingly, from China, but PET container consumption in India and Vietnam is expected to increase too, so it’s likely that demand in the region will continue at high levels.

Middle East-Africa, one of the largest land areas with rapidly growing population, constitutes a relatively lesser share of global consumption, at 22,6 billion units for 2017. That’s still big but comparatively minor in comparison.

The four stations of the ASB series machines operate simultaneously within each cycle. Standard one-step moulding works on the principle that a custom designed preform is injection moulded and cooled to the point where the PET resin is still above its glass transition temperate (Tg), so it is still flexible as it is transferred to the following stations. The residual heat in the preform is then used to allow blow moulding into the finished container shape at the stretch-blow station.

Because injection and cooling of the preforms always requires the longest time of these four processes, the injection station dictates the overall cycle time of the moulding machine, and therefore productivity.

The advantage of the ASB Series has always lain in the second of its four stations, known as the preform conditioning station. It is used to apply a variety of adjustments to the temperature profile and/or the shape of the preform, providing far greater flexibility and stability over competitor molding systems lacking this feature.

It is this removal of cooling from the injection station that enables average productivity increases of 50 percent.