Grant Brackenridge of Wizard Tool & Die with the automotive front-end module mould. Numerous shut-offs are used in the mould (he is demonstrating how the shut-offs work) and, with tolerances of just 3 microns across the approximately metre-wide mould, this is a complex job 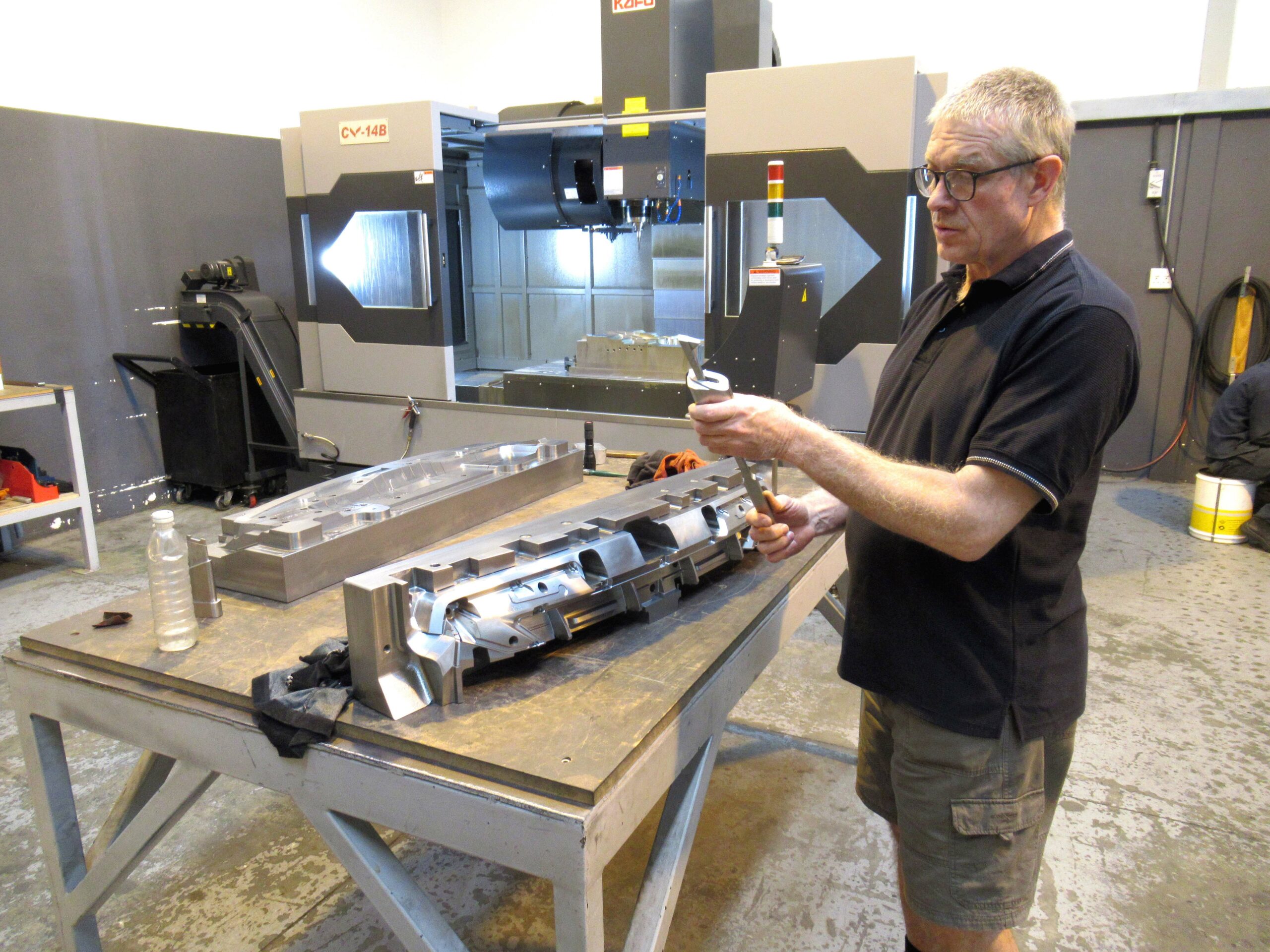 THERE are few experiences for mould makers to top that of having a mould accepted at the initial mould trial. In most cases, minor adjustments need to be undertaken to meet the end user’s brief. The more complex the job is – the more satisfying this can be.

For Wizard Tool & Die of Johannesburg, this is the benchmark it strives to attain on all of the moulds it manufactures.

The Honeydew-based toolroom recently completed work on one of the biggest moulds it has built to date, for an automotive front-end module. Complex moulding is involved in this application, with numerous recessed sections and couplings required for the moulding manufactured to snap-fit attach into the vehicle chassis structure along with other under-the-hood components. In this case, 29 shut-offs are used, meaning that that number of points need to open to allow melt to fill sections and then shut seconds later in order to allow the mould to re-open.

To the customers amazement, Wizard MD Grant Brackenridge’s assurance that the mould would function first-time, in trials, was achieved.

“Customers are sometimes surprised when I say our moulds will be fully operational from the first shot, but that is what we aim for and have been achieving,” said Brackenridge.

The resultant moulding is close to 1m wide and includes both coloured (black) and clear polymer sections. Other chromed parts are attached later and the final assembled module achieves both exceptional surface quality finish and substantial weight reduction (one of the main requirements of automotive OEMs).

Tolerances of no more than three microns are required, and were achieved, according to Brackenridge. It is extremely difficult to achieve such fine tolerances over such a wide moulding, and the result is that zero flashing results. The same extreme tolerances are applied to all the surfaces, so the final mouldings will meet all the automotive manufacturer’s standards.

Brackenridge has been building moulds for over 30 years, formerly at the Johannesburg injection moulding businesses Kopp Plastics and Newton & Taylor as well as the painting/surface coating business Plastichrome. He was also a co-founder of PC Specialised Spraying, which provided considerable experience of the high surface finish thresholds required for parts to be painted (rejects are very expensive losses). He sold PC in 1997 and started BRS Manufacturing that year and then, along with his sons, Wizard Tool & Die in 2008. The company is one of SA’s few standalone toolrooms. Wizard Plastics, a moulding business, has since been spun off and is now run by the sons, Robert and Bradley, in Chamdor, Krugersdorp.

Wizard Tool & Die has built a wide range of moulds, with some of the more interesting including that for a large plastic wine glass where a very large collapsible core was used (the client in this case had poolside beverage consumption in mind) and another for the manufacture of 10mm diameter refractive lenses, where a 4-cavity mould was built.

In each case, Brackenridge’s assurance that the “mould will be fully operational from the first shot” has been proven.

“Our advantage is that we are a small team but a highly skilled team,” says Brackenrigde. Wizard employs a number of tool makers who in the process complete a virtual apprenticeship under the MD’s tutelage.